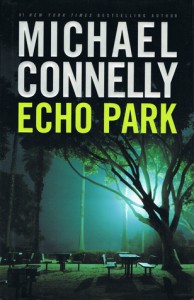 What can I say about Bosch at this point? This book gives you a great mystery, politics, and finally someone just calling out Harry for the crap he keeps pulling when it comes to always doing things his way and his whole damn the consequences thing.

"Echo Park" is the 12th book in the Harry Bosch universe. With Harry now back working Open/Unsolved cases with his partner Kiz, he feels better than he has in a while. However, one of Harry's past cases which has haunted him is coming back in a big way with it looking like a serial killer may have been behind his victim's disappearance. What makes things even bigger this time for Harry is that this case could possibly lead to the LAPD being put under more of a microscope with regards to their actions due a possible change in the DA's office and the city council. I wish I could say that all of Harry's moves are going to go down easy this one, but they don't. I think that Connelly played it this way just to show even more that Harry's sense of right and wrong is skewed at times. If this was Biblical or even Medieval times I would be all for it. But he's still supposed to be a police officer and his job is to protect and serve. Not to make sure that karma/justice comes and gets people every time.

"Echo Park" opens with Harry and his former partner J. Edgar working a case about a missing young woman named Marie Gesto. She disappeared from the grocery store back to her place and her parents contacted the police. Harry and J. Edgar eventually find her car, but never do figure out what happened to Marie. Harry believes she's dead, but without a body or a perpetrator, he doesn't want to let the case go until he can tell her parents what happened to her. The book then fast fowards to Bosch in the present day working at Open/Unsolved. When a fellow officer contacts Bosch about the Marie Gesto murder book, Bosch refuses (of course he does) to turn it in until he is kept privy about why her case is being looked at. When Bosch and Kiz find out that a man the police have brought in via a routine traffic stop is connected to Marie and other murders, it looks like Bosch has got his man. However, things are not what they always appear, and this time through, a lot of stuff comes out in the wash in this one.

Bosch is feeling his age a bit and is lonely this time through. We know that his ex-wife and daughter are living in Hong Kong with Bosch apparently visiting his daughter between books. Every one of these books is about a year after the previous one, so we know it's been about a year since Harry has been back in Open/Unsolved with Kiz.

Bosch eventually reconnects with an old love interest, Rachel Walling. I skipped over the book introducing Rachel, so I don't have much to say about her besides I like her better than Eleanor Wish. I am probably now going to read that book "The Narrows" though I already have a feeling it's going to bug me because of the first person POV and third person POVs (why do authors do this in the same book?). I liked the profiling aspect of Rachel being involved. She definitely gives us more insight into the suspected serial killer. And I loved that she did not put up with Harry's crap and called him out when she saw how reckless and single minded he was being about things.

We get more details about Kiz's life as well and I am wondering due to the ending of this book how does this all shake up for her and Harry.

We have the specter of Irving rearing his head again. Even though the guy is gone from the LAPD, he is out to take them all down.

The writing is typical Connelly and he keeps the flow moving. I will say that this one played with so many elements I honestly didn't think it would all fit. But we have callbacks to Bosch's mother, his time spent in foster care and an orphanage, his prior cases, his other partners, etc. This whole book felt like a reckoning for Bosch, however, I don't think the lessons are going to take.

I love Connelly's Bosch series because it gives me that little taste of noir that I don't know I need until I have not read one of his books for a while. We see Connelly taking real world events (9/11, the war on terror, etc.) and including that into his plot. We get to see the overreach by the FBI and the LAPD in certain cases. What I like best about Connelly's books is you get to see the ending of a case and get to decide whether the ends justify the means. When I got to this ending, I definitely called BS like Rachel did.
Tweet