The Distance Between Us 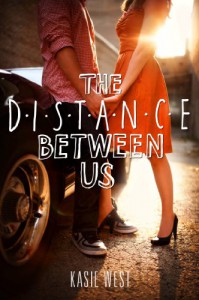 I am so annoyed. I got this book because I enjoyed Kasie West's other book I just finished, "P.S. I Like You." This book made me wonder if I made a mistake in thinking that I may have found another YA author to follow. The plot did not make a lot of sense. I did not care for the main character. I seriously wondered why the love interest even kept hanging out with her, because she ran hot/cold towards him and also was rude. The secondary characters were a mess. And then the book ends and I think I am supposed to be going, ahh or something, because yes teens should totally be running around thinking about forever and marriage. I don't know guys. Maybe it's just me.

The main character, Caymen will work your nerves. She's rude and sarcastic. She even kicks a guy who was actually nice to her, but hey he needed to wake up so ha ha? She answers someone else's phone (I hate that in YA novels, there is no justification for that, stop it!) and decides she knows everything about everything. We find out that Caymen is poor. And not just regular poor, but capital P poor. She lives above a doll shop that she and her mother run. We find out that Caymen's mother is estranged from her family after being disowned for falling pregnant with Caymen when she was a teenager. Caymen's mother accepted money from the boy's father with a promise to not seek him out for anymore money and Caymen's biological father is nowhere to be found.

Now if this had been about one girl's journey out there trying to find out about her family, why her father has not sought her out in 17 years, I would be all for it. Instead, we just have Caymen acting like a jerk and thinking that it's cute. She is resentful of her mother because she thinks/knows her mother wants her to run the doll shop one day. Caymen though is interested in science (and by the way that whole thing came out of nowhere, she goes to school for half days and barely interacts there at all, so I wasn't getting a I really love to learn and love school vibe from Caymen) and wants to go to college, but knows that her mother needs her to give up everything to take care of things. That is me being sarcastic by the way. Honestly 2/3 of the angst in this book would be solved if people actually spoke to one another.

This is supposed to be YA romance, but honestly, there is barely any romance in it for me. We just have people telling Caymen she's poor so Xander and her will never really fit. And heck even Caymen thinks that throughout. So this is like "Pretty in Pink" but only if you hated Molly Ringwald's character.

Secondary characters are sloppily developed. The character of Xander just keeps popping up and is interested in Caymen. I don't get why. I don't know if she's the most beautiful girl he's ever seen or what. But since she was rude and lied to him after their first encounter I am still baffled by what was going on there.

Caymen's mother doesn't make a lot of sense to me. I don't want to get into too much due to spoilers, but it felt like this ending was hastily thrown together, with no thought at all of why in the world would her parents pop back up in 17 years and be all is forgiven. West makes it seem like she kept them away, but then we still have Caymen saying that her grandparents abandoned her mother. And if the grandparents are so rich and were so concerned, you are telling me a private investigator could not have tracked her down? That was what was throwing me about the Matthew character. I assumed he was a private investigator. Instead he was just a bill collector.

Caymen's best friend was just another manic pixie girl and I refuse to even discuss her more than just saying that about her.

The writing was not good in this one. I was confused so many times while reading due to Caymen saying something rude and then inner voicing what she means or inner voicing that the person probably won't get her sense of humor. Dear Caymen, you're a jerk, it's not cute. The flow was awful to from beginning to end. I don't know if it would have made it better if we could have seen Caymen as a little girl in a prologue or what. I don't know if we could have started off with her mother first and then switched back and forth to her. Nothing really worked, and I am wondering if a second POV by Caymen's mother or even Xander could have saved this book for me.

The book takes place in California. But honestly, that is all I got. The main parts of the book take place in Caymen's mother's store. You get to read about how creepy dolls are and how creepy Caymen finds them. Things move around a little bit location wise here and there, but not really.

The ending was too much for me. I am glad though that West managed to restrain herself for going for a straight up cliche ending. I thought for sure someone in this book was a goner. So that's the main and only reason why I gave this two stars.