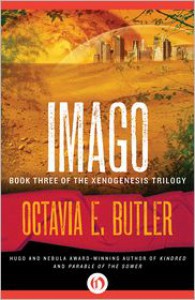 So this is the last in the Xenogenesis or Lilth's Brood series written by Octavia E. Butler.

I liked this one a lot. We once again focus on just one POV throughout the entire novel. We have Lilth's son Jodahs who is born an Oankali construct (humans and Oankali breed with the help of an Oankali called ooloi) and every child born has 5 parents. The ooloi, a sexless subspecies capable of manipulating DNA and without them no one would be able to have children. Jodahs starts to metamorphosis and realizes that he is becoming an ooloi. Until now, no one has been allowed to bear an ooloi since they are careful of so many things and without training, can end of hurting everyone around them.

So once again this book brings up a lot of issues that people may have trouble with. The rape of women is brought up constantly (thank goodness we don't get in depth scenes with that). We also have the discussion of free will, coercion, and human beings who just want to be free without feeling manipulated by the Oankali. The Oankali seem to think that human beings are just one big contradiction since they can tell that humans do want what is being done to them even though they keep saying no (shudder).

Since it has been several hundred years since book #1, and now it is has been 50 years between books #2 and #3, we have a lot of callbacks to the preceding books.

You feel for Jodahs, but also I was torn because as readers we know that he and his other sibling have to have mates or they will be forced to be exiled to the ship and away from their family. When Jodahs comes across two humans with a ton of genetic abnormalities, he finally realizes that fixing humans is something he is supposed to do. Now we get why ooloi could not sit back in books #1 and just let the humans they were paired with be hurt. It also hurts them as well.

We now get an update regarding what is happening and that the Oankali is not stopping any humans/resisters from going to Mars. They just know though that ultimately the humans will fail since they still can't stop fighting or harming each other.

The writing in this book was very though provoking. We have a lot of discussions about looks and Jodahs feels I would say ugly and does his best to look like those around him that he is trying to "seduce". In fact we get to see Jodahs do these several times so unlike the previous ooloi he looks more human. It is even said later in the book, if the ooloi had looked more like how Jodahs now does, more humans would not have been able to say no to the Oankali and resist. So there is definitely a discussion of appearances in this one.

Also Butler doesn't shy away from discussing homosexuality in this one. It is mentioned how many human males are angry for becoming "women" since they need to be around their Oankali and ooloi mates and hate that they can no longer mate with human females. But in this one, Jodahs male human mate definitely loves him and is more forgiving to him of things he holds back (how they will all get sick and feel desperate without one each other) and constantly keeps saying that Jodahs will never get away from him.

This book flow was much better than book #2. I liked how we saw Jodahs go and interact with his family more. And you get a better idea of why the constructs need to be around their siblings and mothers and fathers so much. It keeps them "solid" and more likely to be look more human.

The setting of this book was more expanded than in previous books. We now know the new Earth has a lot of towns/villages and their are shuttles arriving to take humans who want to leave to Mars. There are a lot of resistors angry about the Oankali just not giving up Earth, but the Oankali refuse to leave the Earth to humans and you get why when Jodahs and others talk about what is going to come next with this new race.

I thought the ending was definitely supposed to be more hopeful than books #1 and #2. You know have ooloi who look human and maybe in several hundred years they will look even more human and eventually human beings as we know it will be another species.
Tweet