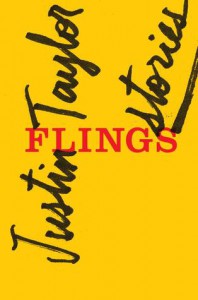 I only liked two stories in Justin Taylor's Flings. They were 'Flings' and 'After Ellen'. I liked them the most since characters from the first story do appear in the second one. Everything else in this book was a wash. I don't get the appeal of reading about seriously screwed up people, as depicted in 'A Talking Cure' or a story about whatever the heck it is supposed to be about but I think maybe clementines in 'Adon Olam'. Nothing much made sense and I found this to be a boring collection of stories. Sadly all of the narrators seemed to possess the same voice which is a neat trick since sometimes the narrator was a man or a woman or a teenager, etc.

I swear that for me the only three authors that I have found that can write short stories are Stephen King, Dean Koontz (I really wish he do another Strange Highways book) and Maeve Binchy.

It is an art to be able to tell a story in just a few pages and be able to imbue those characters with personality and depth. It takes talent to make me care about them in just a few short pages and wonder about them after I close the book. This collection did none of those things for me at all.

Please note that I received this book for free via the Amazon Vine Program.
Tweet