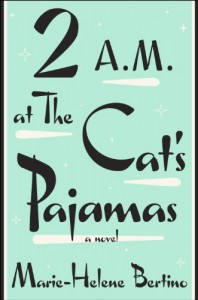 A debut novel from Marie-Helene Bertino that works very well with an interesting cast of characters.

"2 A. M. at The Cat's Pajamas" starts Christmas Eve, Eve (or two days before Christmas).

One of the main characters in this book is 9 year old Madeline. Madeline hopes to be a jazz singer that will perform at "The Cat's Pajamas" in Philadelphia, PA one day. Madeline is of course precocious (is there any other kind when a child ends up being one of the main characters) who is doing her best to deal with her depressed father while trying her best to live by her late mother's advice.

A second character is Madeline's teacher, Sarina, is worried about attending a party where she will see her love from high school.

The third character in this book is the owner of "The Cat's Pajamas", Jack Francis Lorca who is going to be forced to close his club unless he comes up with $30,000.

I can honestly say I am not familiar with jazz at all so this book really did stretch my comfort zone some.

The author Marie-Helene Betrtino tells this story from the third person point of view. She also has all of the chapters broken up showing the time at the very top until the reader gets to the before mentioned 2 a.m. We also go beyond 2 a.m. to read about the characters we have come to know as well, which was nice. The chapters were short and I found myself very surprised to get to the end of the book. The ending was a little bit too twee for me but it works.
Tweet