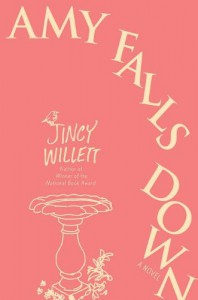 The main protagonist, Amy Gallup, who at one time in her life was an up and coming author, but due to circumstances, has turned into a hard bitter woman in her fifties.

Due to an accident with a birdbath she gives an interview with a journalist that ends up turning her into a media sensation. Amy's former agent gets back in touch and she starts to reluctantly get pulled back into the book industry where she is once again being sought after to write a book.

I picked this novel since at first glance it looked like it would be a good read. However in the end I only ended up rating the novel 2.5 stars.

The biggest issue I had was that I couldn't root for Amy. She was just an unpleasant character throughout the whole novel and I just had a hard time sympathizing with her at all. In the end I didn't care if she was going to be a success again or not, I just wanted the book to be over.

Also the whole novel just goes along in fits and starts and there were so many flashbacks that it got confusing to be reading in one paragraph what Amy is dealing with and then in another what happened twenty years ago. Also you hear allusions to certain events in Amy's past and then you have to keep chugging along and along until you can get to the full story. Instead of feeling satisfied though, I just end up feeling even more irritated. All of the things that Amy went through just seemed so far-fetched and took me out of the story.

I know that ultimately Ms. Willet was trying to show how ridiculous the book publishing business is but in the end I just didn't find myself all that enthralled with the character of Amy or anyone else we came to meet in this novel and was just glad to be finished with the novel when it came to the end. I wish I could have enjoyed this novel like so many other reviewers did but I didn't find it funny, smart, or biting in it's humor at all.

I would not recommend to other readers.

I received this novel for free via the Amazon Vine Program.
Tweet