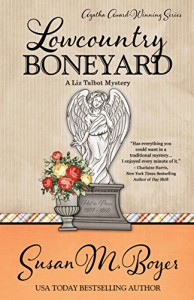 I really loved books #1 and #2 in the series though I thought that they both ended abruptly. This book ends on a nice note, however, the book at times felt overly long in places because of the many mysteries that Liz and her partner Nate are trying to solve.

Book #3 has Liz more or less settled in Stella Maris in South Carolina. It has been two years since the events in the last book and we now have Liz dating her partner Nate long distance. Liz is starting to feel pushed on all sides by her guardian and long dead friend Colleen and Nate and doesn't know if she will be able to leave Stella Maris behind to live with him part time in Greenville. Added on to that, Liz and Nate have been hired to find a missing heiress (Kent Heyward) who has vanished with no trace more than a month prior to the start of this book.

I absolutely love reading these books and Liz has become a favorite of mine. I like that she is absolutely sure about what she wants and doesn't back down from investigating cases even when threatened. Unlike some novels featuring a private investigator, I never have the sense that Liz doesn't know what she's doing and can't take care of herself.

We still have more interactions between her and Colleen. Though there is a new wrinkle about Colleen that I thought was a bit weird this go around. We didn't get a chance to visit with Liz's family much in this book which I thought was a shame. We do get a family dinner where there is a hilarious highlight of Liz's father doing his best to flush out rats that have taken up residence in his front lawn.

We do get some new characters in this one, due to the case that Liz and Nate are investigating. I will say that this one was really dark. The ending surprised me a lot since I thought all along it could go another way.

The writing was great and the flow was the only thing that I had a lot of problems with in this one. I think it was because in this case, Liz and Nate weren't just investigating the case of the missing heiress, they were somehow embroiled in a case of theft and fraud, and also looking into long dead family members of another character. Everything more or less comes together in the end though.

The setting of the lowcountry is a favorite of mine, and Ms. Boyer showcases it very well in this one.

As I said, the ending was very dark, and now I hope that the series follows up on the Heyward family and the other relatives in some way.
Tweet