What a Great Sneak Preview! 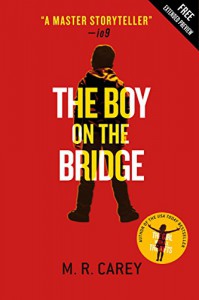 Wow. I had no idea how much I was missing "The Girl With All the Gifts" until I read this free extended preview of "The Boy on the Bridge." This is not a sequel they say, but it takes place in the same post apocalyptic world that Carey wrote about in "The Girl With All The Gifts."

We seem to be following another team that is out to figure out how to combat the hungries in a changed world. We start off following the POV of a character named Dr. Khan who I imagine is going to be just as important to the boy on the bridge as was Miss Justineau was to Melanie in "The Girl With All the Gifts." I won't reveal what I read so far since I don't want to have spoilers out there for everyone, but I read enough to be demanding even more. I need this book so badly right now. I am worried about Khan and a boy named Stephen Greaves who seems to not be a typical boy who is along with this science team.

The writing was lyrical and sad at times. Carey definitely gets you in the right headspace of a world that is slowly dying and or dead. That humanity is about to be wiped out and there's nothing that anyone can do to turn the tide. I wonder after the events of "The Girl With All the Gifts" what this new crew of men and women are going to do when they eventually find out about what happened.

I can't really speak much about flow. I thought this was a bit disjointed, but I am not going to ding this preview for that. It will probably get better when the full version is up for reading. I think I liked being in Khan's POV much more than Stephen's. Yes I love the character of Melanie and don't see how anyone else is going to surpass her.