Got to 50 Percent Mark and Asked Myself, Why I Am Reading This? 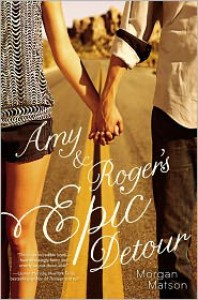 When you get to the 50 percent mark of a book and ask yourself why are you reading it that is not a good thing.

I just didn't care about Amy her dumb detour with Roger and just rolled my eyes since I assume they are going to be all in love by the end of their road trip.

It doesn't help that reading this via Kindle does not allow you to blow up some of the graphics/pictures that the author includes in this book either. I think the whole thing was just a bit gimmicky and then I started to nitpick how far they could drive realistically on tank of gas and how they seemed to avoid certain states and then just gave up any urge to keep reading this.

"Amy & Roger's Epic Detour" is about one woman's totally messed up idea to force her daughter to drive across the country with some random dude she (the mom) and the daughter have not seen since he was 5, or maybe it was 6. Seriously, I just had a hard time believing the circumstances that popped up in this book. I think I was supposed to feel sympathetic towards Amy while reading this book, but I was too busy thinking how selfish and not realistic the mother was in this book and how much Amy was working my nerves.

We have the book starting off with Amy watching two people sitting in a car. You don't know what is going on but you get enough details that Amy is not happy. Then the book jumps around a bit and then you jump back in time (get used to that a lot) Amy is home alone eating pizza on the one plate she keeps reusing. Cue sad violin. And then she gets a call from her mother telling her that due to expenses, she can't have the car flown out to Connecticut (where the mom and now Amy is going to have to get herself moved to) and so she plans on her daughter and a friend's son to drive the car across country since circumstances have Amy no longer driving.

BTW I already guessed the circumstances and so would any reader within the first few pages. I honestly started hating the back and forth timeline that Matson does with this story. We get what happened (no spoilers) and if it was supposed to be some big revelation it didn't work. If anything, it just made me dislike Amy and her mother even more. I just got sick of reading a story about two people who just don't have any sense to talk to each other and get their issues out there. And there's random throwaway lines about Amy's twin brother Charlie that is in rehab in North Carolina.

I ultimately didn't get a sense of any character in this book and I was tired of reading about Roger and his fixation on his ex-girlfriend that even though she broke up with him he decided he was still going to go and see cause hey, why not be a cross country stalker.