Why oh Why Did I Read This Book? 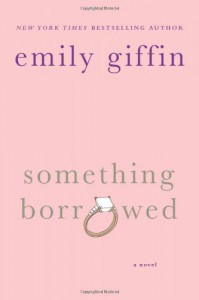 So here's the thing. I used to read Emily Griffin books. For some odd reason I have this book and the sequel to this on my Kindle from way back when. After overstuffing myself with true crime books, I decided to switch to some chick lit. I honestly don't recall reading this book and I am kind of horrified that I ever bought it in the first place.

"Something Borrowed" I think takes way too much pangs to absolve the main character in this one (Rachel) from the guilt she rightfully should feel about having a one night stand with her best friend's (Darcy) fiancee. I think my main romance book reading rule is for the most part, no cheating. I hate reading it and I have a hard time cheering on characters who are doing it. So I ended up finishing this one and the next one in the story "Something Blue" and found that one to actually be much better than this one. Not by much though, I gave the sequel to this one three stars, while the first book just two.

The main character in "Something Borrowed" is Rachel. She's about to celebrate her 30th birthday and is doing well professionally. However, she ends up drinking a lot at the birthday party her best friend Darcy throws for her. She ends up sleeping with Darcy's fiancee Dex and most of the book is her being upset at times about what she did and her trying to justify it because Darcy is evil incarnate.

I think the big issue for me is that Rachel cheats with her best friend's fiancee. I don't think that Griffin did a great job of showing that this was a clearly black and white situation, and had to amp up how terrible Darcy is/was in order to justify it to readers. I also don't believe that Rachel would have stayed friends with Darcy from childhood to her 30s if she was this flawed.

I also don't believe that Rachel and Dex were fighting off some long held attraction for each other. I found him boring and also to be an ass if I may say so. He sleeps with his fiancee's best friend and pretty much runs around most of the book trying to get her to do it again.

Rachel and Darcy have a mutual friend, Ethan, who honestly I think was a better match for Rachel. I was hoping that was the way things would go, but nope. Ethan was better than the other characters in this book by far.

I honestly didn't really dig the writing in this one. This is not my first foray into Griffin's books, but it's really boring reading about someone justifying cheating with a guy who is engaged to their best friend. Heck, even Carrie from Sex and the City realized she was garbage for cheating with Mr. Big and didn't dance around it.

The flow was awful in this one. Maybe because I was tired of Rachel's voice about at the 50 percent point.

And then the book ends on what is on what I think the author believes is a hopeful note. Ugh. I promptly went and read book #2 because that one was Darcy's story.

Also, I sadly recall this was made into a movie that I never did finish. I was trapped on a plane many many moons ago (years) and I recalled when this was offered as a selection. I tend to like Kate Hudson movies (or at least older ones) so put this on and turned it off about 20 minutes into the movie. This is not a romantic comedy. Lord.