Gamache Series Gets Back on Track with Book #7 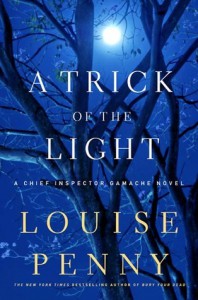 Well we have some fall-out still from the shooting that killed some members of Armand Gamache's homicide unit. Jean-Guy is reeling from a lot of changes in his personal life that are not affecting his health. Gamache is troubled by changes going on with his daughter, Annie and with a former friend of his in Three Pines as well. A murder victim is found in Three Pines (again) that ends up revealing a lot about some of the residents there. I have to say that there was some minor-shake up in the series that I liked and some that I did not.

"A Trick of the Light' centers around Clara Marrow's one woman art show (finally). Clara and her paintings are an instant success and when she wakes up the next day she finds a dead woman in her garden. Chief Inspector Gamache and his crew are quickly called in and when the dead woman is found to be an old friend of Clara's she has not spoken to in decades. We find out that the dead woman, Lillian Dyson, was a former art critic known for destroying many artists careers before they even started. Lillian was eaten up by jealously of those around her and was an emotional vampire. Clara wonders why Lillian would seek her out after so long a time.

Gamache and his team dive into Lillian's background that leads to someone in the art world being behind her death.

I would say the main theme in this book really is about forgiveness. We have Peter attempting to be forgiven by Clara after she finally starts to see things she has tried to hide from herself for so long about him. Clara seeks forgiveness from Lillian's parents even though she did nothing wrong. An art critic who tried to ruin Clara seeks her forgiveness. Gamache seeks forgiveness from Olivier. And Olivier seeks forgiveness from the villagers in Three Pines. I will say that I still hate what Penny did with Olivier's character. I don't trust him at all and think it's far-fetched anyone out there would be okay with the things that he did. I did love Ruth from beginning to end. She has now become my favorite character. Heck, I love her let's not call it friendship with Jean-Guy now too.

Speaking of Jean-Guy. I do not get the total 180 on this character. I just don't buy his never felt before love at all. It read as false. Glad Ruth called him out on it too.

The writing was more focused in this one, though I will live a happy day if I don't have to read about the police shooting ever again. And the flow was much better too. I think just keeping things to one plot helped. There was way too much going on in the last book.

The setting of Three Pines feels more peaceful in this one. Maybe because we have people finally seeing each other for who they are and also really thinking on what it means to truly forgive someone.

The book leaves some characters on a different path than the one they have been walking this whole time. Unfortunately it seems another police conspiracy is rearing it's ugly head and I hoped we were done with that in this series.