Begs For A Sequel 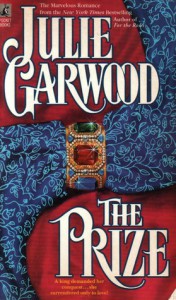 "The Prize" takes place during William the Conqueror's time. We have the Saxon and Normans at each others throats. When Lady Nicholaa is captured by Royce Melborn, she finally is forced to pick a husband out of the Normans. She ends up choosing Royce and from there, these two have what I consider one of my favorite romances.

Seriously you guys, when Nicholaa comes across Royce, she ends up taking his ass out during a battle with a slingshot. I kind of fell in love. Nicholaa does what she can to protect her home and family, and tricks Royce (dude I laughed through most of this book) but eventually is outmaneuvered by Royce.

Nicholaa is everything you want in a heroine. Smart, loyal, and when she realizes she loves Royce, decides she will be the kind of wife he keeps lecturing her she should be. Royce's constant lectures pop up throughout this book and will make you laugh. I loved Royce cause he treats Nicholaa with respect throughout the book and realizes how smart his wife is. When one of Nicholaa's brothers (Justin) is found, missing a hand, Royce trains him along with the rest of his men and won't let Justin go off and die somewhere.

I have to say that I loved Royce, no more than when he realizes that when Nicholaa decides to be the kind of wife he says he wants, he realizes he was an idiot, and wants his bossy wife back again.

There are wonderful love scenes in this one and some great palace intrigue as well.

I found myself loving Justin as much as Nicholaa and wished that Garwoord had written a sequel telling his story, since there is still the loose end of one of Nicholaa's brothers who is hell-bent on killing William the Conqueror and the rest of the Normans.