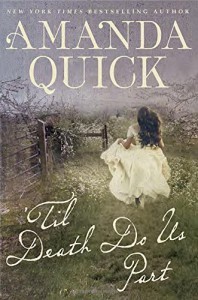 Well now I know why the rating for this book wasn't that high. This really read as a paint by numbers Quick book. I was disappointed because I know she can write better than this (see Ravished) but this one was pretty blah. The hero/heroine were not that memorable, the main story-line was not working for me at all and we hear about the rape of a secondary character that ultimately moved me to pity and wondered why that was even thrown in the book. We do get a happily ever after though which made me happy. I am trying to remember what series she wrote that had the two leads just investigating and sleeping together and it drove me up the wall.

The heroine in "Til Death Do Us Part" is Calista Langley that operates a matchmaking service. The synopsis calls it an "introductory agency" but I am just going to call it matchmaking. She holds salons that have single men/women that come to chat about different topics while getting to know each other. Calista has somehow been targeted by a madman that leaves trinkets and other items to show that he means to kill her soon.

The hero, Trent Hastings is an author who has done his best to avoid polite society. Due to scars on his face and some lingering anger that he could not protect his mother, Trent believes that Calista has to be running some sort of scam. He finds himself attracted to her though and gets embroiled in finding out who means her harm.

We have some interesting secondary characters, Trent's sister, brother, and sister in law, and Calista's brother who helps her out by investigating potential clients.

I think my biggest issue is that Calista and Trent really didn't do much for me as a couple. Why they were even attracted to each other puzzled me. We just see them investigating and we get two love scenes. Big whoop.

The writing was okay, but the book dragged in places. I pretty much guessed most of the book, but not all of it. And I think Quick was way too rushed to explain everything. I wish that the clues we were given took more time to find and the true guilty party had a better reasoning behind what they did.

We do get a Happy Ever After though which was nice.

Historical Romance Amanda Quick til death do us part