Not My Favorite Christie 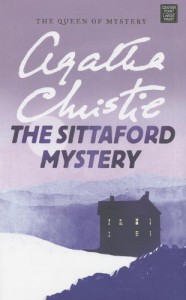 It's weird for me to dislike Christie books, but this one did nothing for me. It was a struggle to finish. I think the main issue was that I just found the why behind who murdered an eccentric and misogynistic man (Captain Trevelyan) to be boring due to one of the main character we follow through most of the book.

Captain Trevelyan is found murdered after a weird seance tells the group who is holding it that he is dead. Trevelyan's long time friend and neighbor Major Burnaby goes to his home during a heavy snow and finds Trevelyan dead. Trevelyan's will leaves things to his sister and to his niece and two nephews. Questions quickly emerge about was it one of Trevelyan's family members that finally did him in for their inheritance.

I was more interested when we had Inspector Narricot investigating things. He reminded me a lot of Poirot in his thinking, but the way he acted with people reminded me of Superintendent Battle. When Christie switched over to the fiancee of a man suspected of the murder (Emily) I just didn't care anymore.

Christie tried to throw some romance via Emily and two men during the course of the book, but in the end Emily chooses the one who I considered to be a waste. This is a common theme in Christie books though. She always has the bright young thing seemingly throwing her life away on some man that is not perfect since she will bring him up to scratch.

I also didn't like how we get the perspective of the person who murdered Trevelyan but with a cheat (you don't know that you are not getting the full picture until the end). Usually it seems so obvious when Christie reveals the who and the why since she props up clues along the way. This book felt very muddled to me.