The Hysteria of Salem 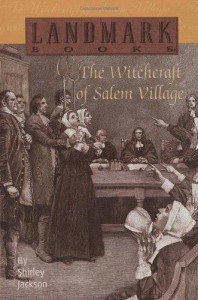 I took my time with this one since I found the whole thing so fascinating and also Jackson did a great job of including new information that I have not heard about before. She ends the book with a theory about the girls who started it all being afflicted by a fungus on a bread, but she doesn't seem to put much weight behind it and neither do I.

I think most Americans are familiar with the Puritans and also the witchcraft hysteria that gripped Salem Village in 1692. Jackson begins at the beginning with how the Puritans were fleeing religious persecution in England, but really were about conformity and insisting that there fellow brethren were not as religious as they were. She also touches upon the poverty in the village and how there was very few things for young girls and boys to do besides attend church meetings. Any schooling they received was only about religious texts. So Jackson sets a very nice stage for what happens next.

A group of young girls starts accusing the women around them of witchcraft after one of them starts to have fits. Is it irony that the one girl and cousin who started accusing women were the daughter and niece of the local reverend?

Betty Parris was 9, and her cousin Abigail Williams was 11. Betty's father Reverend Samuel Parris was all too ready to believe that his flock contained witches. Jackson goes on a bit that he was a fan of Cotton Mather. To me that's like being a fan of Stephen Miller.

Eventually these girls were joined by Ann Putnam Jr. and Elizabeth Hubbard. The girls went around falling into fits when examined, saying that they were being pinched and or burned and would howl when coming across people. The scenes that Jackson describes boggle the mind. I would have been calling bullshit left and right. Then again, I would have totally been burned at the stake.

Eventually the girls accused Sarah Good, Sarah Osborne, and Tituba (Reverend Parris's housekeeper). Jackson touches upon how the first three women accused were seen as outsiders by the villagers. Jackson is slightly damning of Tituba who confessed and went on to accuse other women.  Eventually other women were named such as Martha Corey and Sarah Good's young daughter (she was 5) Dorcas Good, and Rebecca Nurse.

"Mary Walcott and Elizabeth Hubbard stood up in their places. One of them swore solemnly that Goodwife Nurse had come to her at night and sat upon her chest to suffocate her. The other pointed out that a black man stood, even now, whispering in Goodwife Nurse’s ear and that yellow birds were flying about her head."

I think what got me as a reader is that the girls accusations become more and more unbelievable and no one except a few people tried to push back on it. Some people flat out fled to other colonies than deal with the cries of witchcraft that went on.

It is interesting to note that the afflicted girls in Salem Village cried out upon Robert Calef shortly after Mather’s visit. Calef’s answer, which reached them with all possible speed, was an announcement of a slander suit for a thousand pounds. The accusation against Calef was immediately withdrawn, and his name was not mentioned again in Salem Village.

There is some new information here about how the accusations spread to Andover and how the girls even eventually were brought there to identify witches. They ended up finding mostly everyone there to be witches. You think that would have caused everyone to go these girls are full of it.

In the end, things do not start to wind down until after the execution of 19 people on Gallows Hill and one person being pressed to death. Giles Corey's pressing seemed to be finally the end of the witchcraft accusations. His death shamed the community as a whole and they all finally woke up to the fact that they got played by young girls and some women who were out to cast aspersions onto their more well to do neighbors. The hysteria spread from Salem to Andover and they had jails full of people accused of witchcraft. I think Jackson mentions 150 people were jailed.

Jackson cannot find out that much about what happened to some of the accused. We find out that Parris died in poverty (good riddance) after being chased out of the village. Many blamed him and his relatives for what happened. Jackson mentions that his house no longer stands and it's barren ground now. What started cause ripples through the whole community with Salem sliding more into poverty since many people gave up farming or seeing to their homes due to watching the newest accusation or trial. Many who were accused came out of prison and found their homes and belongings lost to them forever.

The Commonwealth of Massachusetts did not formally clear everyone accused of witchcraft until 1957.