Most of the Book Focused on Suspense Not the Romance 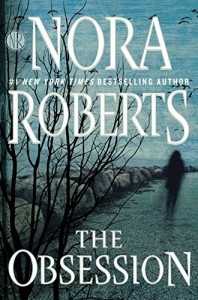 Not too much to say here. Roberts focuses mostly on the suspense aspect of this book and it works much better. The main reason why I gave it three stars is that I think that it would have been smart to include the POV of Naomi's brother as well. Thank goodness though he doesn't enter into a romance in this one. I loved how they both changed based on what happened with their parents and the paths they took. Other than that the book felt a bit boring to me. I guess because bad guys like depicted in this book seem really stupid. I guess I have been reading too many books about serial killers (Ann Rule) to think that anyone would be this freaking stupid, I digress.

"The Obsession" shows the aftermath when a pre-teen Naomi Bowes follows her father into the woods. Her father is a hard man, but Naomi, her mother, and her brother live to please him. Until the day they find out her's not what he seems. Naomi and her family's life gets turned upside down. I think at least the first 30 or 40 percent of the book follows the ups and downs of Naomi's family's life. I do wish we had gotten some background about why she likes taking photos though. It seemed random. Or maybe after reading "Sanctuary" I am realizing that this is one of Roberts go to careers for her female characters.

Naomi's brother Mason who goes into psychology and then the FBI was very  interesting to me though. I found myself wanting to read more about him.

The bad guy in this one was super obvious though.

The writing in the first parts were great. One wonders why Roberts doesn't just write thrillers. She does that part well. I found myself bored with Naomi's love interest Xander. I maybe laughed though because Roberts includes a lost dog in this one that becomes attached to her which reminded me of "Shelter in Place." The flow was so-so. I think it was because until things get going with the serial killer in this one we just read about Naomi renovating a huge house she built. And read about furniture she is buying. And we read about her painting and floors. I just renovated a major portion of my house. I didn't care. I just started skipping over things after a while.

The setting of Sunrise Cove read very small town and I don't know how realistic it would be for the town to be so welcoming when they find out who Naomi is.

The ending was rushed and ends abruptly. This definitely needed an epilogue and more interaction with the uncles.