What a Wonderful Collection of Essays 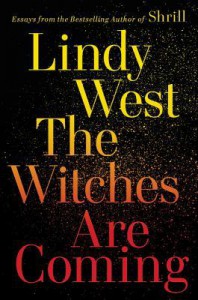 Well I don't know how to talk about this collection of essays by Lindy West. She does a great job of discussing and analyzing key moments over the past couple of years (the election of Donald Trump, the rise of the left, feminism, etc.) She also manages to make you laugh and at times want to throw hands at people because of the things that are going on and how many people seem to be turning a blind eye to things.

Since this is an essay collection, I am just going to comment on the ones that touched me the most while reading.

Introduction: They Let You Do It (5 stars)-West starts off with a bang here. She goes into how a man her husband meets is all up in arms that now he can't just you know touch a woman without her permission. Good on her husband for not kneeing these tool. She then goes straight for how some of the American public ignored Donald Trump's statements about women and sexual assault prior to him being elected as President. And laments how close we came to our first woman President, but we as a nation don't seem to be there yet.

"Donald Trump is rape culture's blathering id, and just a few days after the Access Hollywood tape dropped, then Democratic nominee Hillary Clinton (who, no doubt, has just as many man-made scars as the rest of us) was required to stand next to him on a stage for presidential debate and remain unflappable while being held to an astronomically higher standard and pretend that he was her equal while his followers persisted in howling that sexism is a feminist myth."

Choosing the Lie (4 stars)-West goes in on the curious case of Grumpy Cat and what his owners really called him and how for the most part the American public seems okay with being lied to, but only certain lies. She contrasts this with the rise of Milo Yiannopoulos and his working alongside white nationalists (call them Nazis!) and how when it came out that he was okay with sexual relationships between thirteen year old boys and adult men, he got dropped with the quickness by his publisher. But think about all of the lies that Milo and his ilk have pushed out (remember Comet Pizza, Hillary really apparently partying with Satanists? Or was that her campaign manager? I can't even talk about these dumb conspiracies anymore, except the fact that we are now having impeachment hearings because the President is a freaking 4chan thread come to life and decided to go with Ukraine was behind election interference and not Russia).

Ted Bundy Was Not Charming--Are you High? (5 stars)-West touches upon women's fascination with true crime. And hits upon why I read it, it's like a whose who about bad things that can happen to you as a woman and therefore you prepare. My friend from work once told me she got really paranoid when she was pregnant that her husuband was goign to murder her cause according to Dateline stories, this seems to happen a lot. I thought it was great though that West slaps down that crap about how great Ted Bundy was, he was an average looking white man who used the time and place and how women were raised (be nice, be helpful, etc) to lure his victims who he murdered.

Always Meet Your Heroes (3.5 stars)-This is still a favorite, though I am fascinated by West being into Guy Fieri. I think if I ever met him in real life I would try to smother him. But I thought it was great she touched upon the rise of Chip and Joanna Gaines and how everyone gave them a past for belonging to a megachurch that was not pro LGBT.

Joan-(5 stars)-West goes into Joan Rivers and the contrasts she was pushing. She beat down on anyone outside of Hollywood norms, but desperately wanted more for herself. She wanted to be one of the boys, but didn't do a lot to help anyone else up. However, it's an interesting look at when she started in comedy and how the boys club mentality seemed to influence her all of her life.

What is an Abortion Anyway (5 stars)-Just read it.

Anger is a Weapon (5 stars)-West touches upon the terribleness with the Kavanaugh hearing and also Harvey Weinstein. She gets into women's anger, the metoo movement, and also the men's right movement (ya'll stay exhausting).

Tomorrow is the First Day (5 stars)-The last essay in the collection with West reflecting on things and how we need to decide now who we are going to be after Donald Trump is out of office. Are we going to be witches? Are we going to push for our future?