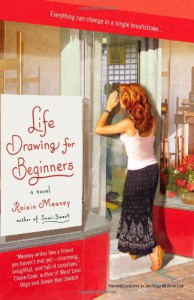 I apparently bought this book eons ago and I honestly don't remember anything about it. I now know why I don't remember this book, it's mostly forgettable. It doesn't help that the author tries to follow 7 people (I think it's 7) and most of the stories are fragmented due to the jumping back and forth. There's also plot points that are left open and I wondered about them since they felt really important to resolve them (one man is a pariah in his old town and had to leave for reasons the book gets to) before the ending. I also flat out didn't like some of the characters so I started to hate every time Meaney switched to them. I know if you can call this chick lit. Chick lit should be mostly romance with sometimes some serious issues if the author wants to tackle them. This had zero romance, and I got to say Meaney tries to throw a bow on two couples (that she force fits together) that I didn't see going the distance.

"Life Drawing for Beginners" follows Audrey Matthews who decides to hold a life drawing class in the town of Carrickbawn. The participants in her class sign up for various reasons: Irene (looking to get out of the house away from her husband and daughter), James (trying to have time away from worrying about his past and his daughter), Zarek (trying to hide who he really is), Fiona (happily married and expecting her first child) and Meg (married unhappily it seems). The model for the class is Jackie who wants to save up to buy her son a Wii. There's also a man who runs a pet shop that Audrey loathes due to their interactions, Michael. And two people who claim to know someone from Michael's past keep coming to his store asking for help. So yeah that's a lot of people that the book follows though the summary mentions following four people.

I can't really say I loved one character the most. I think the one that was the most developed was Michael. He had a hard life and you get to see why he acts the way he does. I disliked how he carried himself and how he was when someone reached out to him for help, but I got why he was that way. By the end of the book you get to see someone different who hardened up because of things that happened.

The setting of Carrickbawn seems really small at times. The characters sometimes run into each other and sometimes not. They all had a main plot for themselves, but sometimes things overlapped like with Irene and two other characters.

As I said the ending didn't have a happy ending for everyone. Two couples or I guess three now that I think of it are going to try for romances and you don't know if it's going to be 100 percent successful. There were dangling plot threads left open that I wish that Meaney had resolved, especially with the character of James.