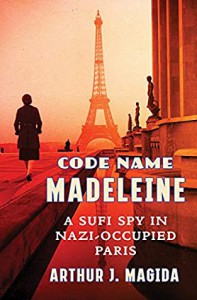 This was really good. I don't know what else to say. Magida did a great job with telling us the story of Noor and how she came to be a spy. Magida also has pictures of Noor's family and different locations that helped tell her story. I also loved that he included further reading for those out there that want to read more information. I finished this book at 80 percent, the remaining parts of it were notes.

"Code Name Madeline: A Sufi Spy in Nazi-Occupied Paris" follows Noor Inayat Khan. She is flying in a plane under the cover of night during a full moon into France. From there Magida traces her family's history (her father was Inayat Khan and was descended from nobility, her mother was Ora Ray Baker, an American). Magida goes into Khan's family and their disapproval of Ora and then we get to Ora's birth in Moscow of all places. The book jumps forward and then we are following Noor as she decides to do what she can to resist Hitler and the Nazi regime. Her story is one of determination and also sadness because you find out what became of her. I had never heard of her before this book and I have to say that Magida did her justice.

The writing I thought was crisp and was filled with so many historical tidbits it keeps you reading. Magida is able to fan your interest with not boring you to death which many writers of history are not that great at.

The flow of the book was really good and was broken up with pictures of Noor, her family, and other things. It really made her came alive to me with the addition of the pictures.

The setting of Europe during the Nazi regime is heartbreaking. Finding out what became of Noor and others during the war still boggles my mind. You wonder how human beings can be so cruel to each other.

The ending to me is bittersweet:

At the close of the day when life's toil fades away,

And all so peaceful sleep,

No rest do I find since Thou left one behind, 'Till

Death around me doth creep.

Bitter nights of despair hath made fragrant the air,

I watch and I wait 'till Thou openeth the gate, And

Thy love leadeth one through.