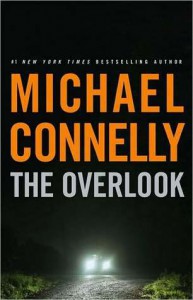 Eh. This was not my favorite Bosch. After a couple of home-runs with this series, this was definitely a disappointment. About half the length of his usual books, Connelly uses this to just show readers excerpts from his other books. I hit the finish line with this book at 74 percent I think. The remaining was just excerpts.

This felt and reads more like a short story. We have so many plot holes I don't even know which to begin with in "The Overlook." It's been a year since the events in "Echo Park." Harry is still bitter that Rachel Walling cut him off (I would have too) after his shennigans in the last book. He is still visiting his daughter in Hong Kong when he has time. He now has a new partner, after Kiz has gone back to working for the Chief of Police. His partner Ignacio (call me Iggy) Ferras is younger than Bosch, and their partnership is not going very smoothly. I wish I could sympathize with Bosch more, but honestly I was tired of his games from beginning to end in this one. And thankfully Bosch finally got it through his thick head he can't just do what he wants with no blow back. Maybe nuclear material entering the picture in this one was what he needed.

Bosch is no longer in Open/Unsolved. Now he is a unit called Homicide Special Squad. Bosch and Iggy (I don't care that Bosch doesn't like the guy's nickname, he was being an ass by refusing to use it) are called to a homicide where a Doctor Stanley Kent is found with some bullets to the head. It looks like a simple case of possible robbery gone wrong until Bosch is informed that Kent has access to radioactive material due to his job and a possible terrorist may have gotten his hands on it. Enter Rachel Walling and her colleagues from the FBI.

I was happy to see Rachel back in Bosch's face and Bosch realizing that many at the FBI think and know what a loose cannon he is. Bosch has hurt feelings about the whole thing and I may have stated mumbling "boy bye" under my breath. I like Bosch. But I am over the martyr act he has going for most of this book. Also since tracking down radioactive substances is more of an issue than him finding out who killed Stanley Kent I felt like his pissing match with the FBI was just ridiculous.

We get some new faces in this one and of course new with Iggy and some others. We see a reappearance of J. Edgar who once again proves that tv J. Edgar is better than book J. Edgar. It always makes me uncomfortable how Connelly portrays him as lazy and homophobic. Ugh.

The writing wasn't on par with previous books. I counted so many plot holes I gave up after 10. I think my biggest issue is that it doesn't make sense when you find out the why behind Kent's murder. It's beyond stupid. Why do something that would bring in the cops and the FBI? I think at that point you want to get caught. That's all I am going to say about that.

The book ends on a weird note. I know Bosch isn't dead (hello other books in the series) but it leaves things on a fraught note with him maybe getting in trouble due to being around some of the radioactive material. We have another partner of his who may be down and out. And at this point, you couldn't pay me to partner with Bosch.