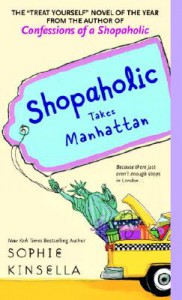 I am glad that I re-read this book, but feel disappointed overall with how the earlier books in the Shopaholic series no longer stand up. I think it's because I have already read these books and the latest, that I just feel nothing but flat out annoyance towards Rebecca (Becky) and her hare-brained schemes to not pay her bills, to cover up when she's in over her head, and somehow through sheer luck to get out of trouble. And then somehow is in the right in the end when she is 100 percent in the wrong.

I read the first book several years ago and remember being charmed by it. In this second book, we now have Becky and Luke dating. Becky has convinced Luke to go off and take a mini-break to the country. While there she realizes that Luke has plans to expand his company to America, specifically New York. Becky after the events in the last book has paid off all of her debts and thinks she finally has her shopping bug under control.

Spoilers, she does not.

Pretty much Becky acts as if she has paid her bills off, that apparently if she uses her credit card that means her balance stays zero. Considering that Becky is a financial expert (seriously this was always funny to me) on a morning television show, you would think she be a bit smarter. I think readers are supposed to find Becky endearing. I just found her to be hopelessly immature.

Becky's relationship with her parents is to keep them in the dark (though you of course realize they are not that dumb) and she wants Luke to make a public declaration of his love for her. Honestly, I never got to be much of Luke fan until the later books. He feels like a non-person in these earlier books. We are given bare bone facts about him and you can feel yourself sympathizing with him. But then we are supposed to ignore his need to prove himself in America cause Becky gets her feelings hurt when they go to New York.

There are secondary characters long time readers know about like Tarquin and Suze. They also don't age very well in this second book in my opinion.

The writing was okay, but the flow was pretty bad. I think it is because you are just waiting for the characters to move along to New York. Of course once we move from London to New York I was bored senseless. You don't get a real sense of the city, crowds, movement, the uniqueness of New York. That's cause all Becky is focused on is shopping and hiding it from Luke.

The ending at first I thought redeemed itself. But when we go to two months later and things are just kind of hand-waved away and Luke telling Becky how right she is (after once again having her finances get to threat level midnight levels) I just yawned myself through it.

I read this for Romance Book Bingo 2017 square: Second Chances

This fits that square because the main couple breaks up and then gets back together at the end of the book..
Tweet