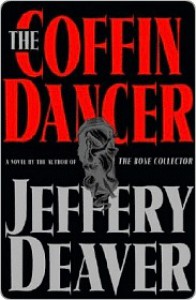 Wow. That's all I have. What a fantastic second book in The Lincoln Rhymes series.

It's a year since the events in the first book. Lincoln is now working as a consultant to the police and FBI with Amelia assisting him. Pulled into a case involving the hitman named as "The Coffin Dancer" Rhymes has personal reasons for bringing him down.

I loved Rhymes in this one. He was less acidic in his interactions with everyone. Though it's clear something is off with Amelia, though Rhymes ignores it since he is focused on the case and keeping her safe.

Amelia has definitely learned a lot from Rhymes. Though she's starting to realize she wants more out of the relationship. I loved all of the scenes with Amelia walking the scenes and investigating. Her reactions to one of the witnesses started to feel a bit much though.

The secondary characters shine in this one too. Rhymes and Amelia are doing what they can to track down the Coffin Dancer to stop him from killing two witnesses. One of the witnesses, a former Navy pilot has to deal with the fact she's lost a husband and is doing what she can to save their business.

We once again have the killer's POV in this one. That was the weakest part of the book. I also don't want to read the words "worm" or "wormy" for a long time.

The writing had a lot of technical aspects in it, and though I couldn't follow all of the flying jargon, I got the gist of it.

The flow was a little off when we shifted to The Coffin Dancer. Everything else was pitch perfect too.

Once again New York shines in this one. But instead of random historical areas, this time we focus on airfields and safe houses.

The ending has a great twist and a wonderful next chapter for Lincoln and Amelia.
Tweet