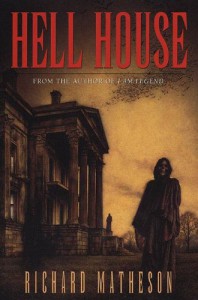 Sometimes it's nice to just read a really good horror book. I think besides a couple of flow problems and the story taking a while to get going, there is a reason why this one is a classic.

Taking place in 1970, a man named William Deutsch wants to investigate the possibility of life after death. He hires four people to go and investigate the infamous Belasco house in Maine.

The four people who go to investigate are: Dr. Lionel Barrett, a physicist and his wife Edith. The two other people are Florence Tanner (who is a spiritualist and a mental medium) and Benjamin Fischer (a physical medium) who has an unusual connection with the Belasco house.

Lionel is merely there to de-bunk any claims by the two spiritualists. He does not believe in ghosts (Ghostbusters) and thinks that science can explain everything. He was a frustrating character to read after a while because he was quick to point out flaws in everything. I think at one point the character Florence asks why can't they both be right and I thought the way that circled back to the ending was very well done.

Lionel's wife Edith is repressed and scared to be alone. Of course once she is in the house, a lot of things about her seem to come to the surface.

I like the character of Florence the best. She really wants to do what she can to put the ghosts residing in Hell House to rest. Even though it can mean her death, she is focused on that and holds her religious beliefs close to her.

Benjamin I found was trying to redeem himself based on what happened the last time he was in Hell House.

I thought the writing was really good, but as I said in some of my updates, things got a bit too graphic after a while. The author is very focused on women's breasts too. After a while I just rolled my eyes. As Char has said, maybe it was a product of the times (1970s) but I found myself ignoring it.

The book I found to be scary at times just because of the overall mood of the house and how the house was changing them.

The flow was not great to start with. I think that the book doesn't set up a lot of things enough here and there, so you had to re-read some passages some of the time in order to understand what is going on.

The setting of the house comes alive in this book slowly. I still don't know why people didn't run screaming out of there. But hey I don't go investigating haunted houses.

The ending was a very nice reveal I found. Glad I crossed this off my 2016 horror list.