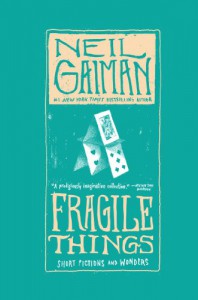 Please note that I gave this 3.5 stars. I rounded it up to 4 stars on Goodreads.

So all in all definitely a mixed bag I am sad to say. I have loved everything else that I have read of Neil Gaiman's though I did only find Good Omens to be okay/good and have no intention of re-reading it. I have already read "Coraline" and "The Ocean at the End of the Lane" twice this year.

"The Fairy Reel" (4.5 stars)- I liked the poem and it did have me imagining a young man out in the woods calling to a fairy.

"October in the Chair" (5 stars)-This was a great story involving the months as we know them coming to life and telling stories.

"The Hidden Chamber" (3 stars)- I think I just dislike poems. I recall from Stephen King's latest he had some in there and I just hard cringed at them.

"Forbidden Brides of the Faceless Slaves of the Secret House of the Night of Dread Desire" (3 stars)- I still have absolutely no idea what int he world was going on. We have a man writing a ghost story and oh yeah he may live in a haunted house. And people are not who they appear to be. And things just end on no explanation.

"The Flints of Memory Lane" (4 stars)- Just a short story about a young man remembering the time he came across something evil.

"Closing Time" (4.5 stars)- This story was a little weird, but in the end I liked it well enough. I think that the problem was the reveal just happens and I sat there scratching my head. So I don't know what the man in the story met as a young boy.

"Going Wodwo" (1 star) -Another poem. At least it was only a page and a half.

"Bitter Grounds" (2 stars)-This story seemed endless and nonsensical. I am still trying to figure out what happened to the anthropology professor so maybe that's why I could not get into this story.

"Other People" (3 stars) - I was the least surprised person at the end of this short story.

"Keepsakes and Treasures" (1 star)- I know that there are evil people in the world, but this whole story was repulsive as hell. I found it hard to read and hope that Mr. Alice and Mr. Smith show up again and something terrible happens to them both.

"Good Boys Deserve Favors" (2 stars)- An okay story. I just didn't get the point of it. It stuck out a bit in this collection to me.

"The Facts in the Case of the Departure of Miss Finch" (1 star)- This story was so odd. I don't even know what I was supposed to take away from it. Miss Finch sucks. But so do the other people in this story.

"The Problem of Susan" (5 stars)- Disturbing as anything, but it does give a different perspective as what became of Susan Pevensie and why she turned her back on all things Narnia. I do want to high five Mr. Gaiman for this one. It has never sat right for me that Susan was left behind to never enter Narnia because of some b.s. reasons.

"How Do You Think It Feels?" (3 stars)- I went back and forth on this one because I thought the main character was a jerk. And it seems in the end maybe he imagined things about a former lover. Who knows.

"Fifteen Painted Cards from a Vampire Tarot" (1 star)- No. I just read that thing twice and just rolled my eyes.

"Feeders and Eaters" (3 stars)- Another weird story. Why did the character of Eddie even get into the arrangement that he did. There were so many questions I had. I think the ending was supposed to shock, but I was left with a lot of questions.

"Diseasemaker's Croup" (.5 star) - My eyes glazed over so I can't tell you what this was about. I tried to re-read it for the final review and my brain shut that down so quickly it was unreal. So that's all I got. I could not stand to read this past two paragraphs.

"In the End" (1.5 stars)- Barely counts as a short story about the Garden of Eden.

"Goliath" (4 stars)- Sad story from beginning to end. Now of course I am wondering what was real and what was not based on how the story went.

"Pages from a Journal Found in a Shoebox Left in a Greyhound Bus Somewhere Between Tulsa, Oklahoma, and Louisville, Kentucky" (3.5 stars)-It was okay. I just didn't get into this story much.

"How to Talk to Girls at Parties" (3 stars)-Very weird. I really didn't get into it at all.

"The Day the Saucers Came" (4 stars)- I did like this long winding story where it comes out that sitting around and waiting for someone to call you is pretty much never the answer.

"Sunbird" (4 stars)- I liked the whole thing about this elusive eating club getting their just desserts.

"Inventing Aladdin" (3 stars)- Another poem taking a look at Scheherazade. This was one of the few poems in the collection that I enjoyed.

"The Monarch of the Glen" (5 stars) -This is American Gods #1.5 and I will say that if I had gotten this as a stand alone novella I would have been happy. We get to revisit Shadow and see how he is faring. He comes across some things that should not be real and also the characters Mr. Alice and Mr. Smith from a previous story in this collection.
Tweet