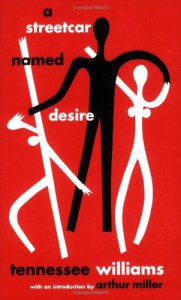 I read this play as part of Dead Writers Society Literary Birthday Challenge for March. I am so happy that I selected Williams as one of the authors I wanted to read this month.

I think in school I may have possibly read one of the first scenes from this play and that was it. Reading the entire play in one sitting was fantastic. Tennessee Williams doesn't just focus on the characters, he focuses on the music being played in the scenes, how the music changes based on what characters are saying, how they should look, how set pieces should look, etc. This was like getting a behind the scene notes on how a play is written.

FYI there is a discussion of rape in this review so please skip over if you don't want to read about the subject.

Following two sisters, Blanche and Stella, we have Stella living in New Orleans married to her husband Stanley. Stella was fairly well off before marrying Stanley, and the two are in a marriage that has a lot of passion but also a lot of anger and fights.

Stella still recovering from the loss of her first husband, has come to visit Stella. It's pretty apparent that things are not what they seem with Stella and that she is a bit "off" so to speak based on later scenes.

Stella and Blanche are total opposites in some ways, but geez oh geez, they have some similarities. For example, both bury their head in the sand when it comes back to facing up to their reality.

Blanche still wants to believe she's a Southern belle with beaus scampering after her.

Stella wants to believe that passion and the love she has for Stanley is enough though he is at times abusive when he drinks and is definitely verbal abusive to her when he has not drunk.

The character of Stanley is crude, hurtful, and smart. I think that is one of the things that you don't realize at first glance. Stanley takes his time, but he ensures that he breaks Blanche down to size. The fact that when he first met her and he realized her opinion of him, his only reaction was to do what he could to make her be a woman, i.e. someone he could control just like Stella.

The secondary characters in this play, Mitch (a potential beau for Blanche) and Eunice (upstairs neighbor and friend to Stella) are given solid backgrounds as well. Eunice seems to be just as lost as Stella is regarding how a woman she expect to be treated by her man and or husband. Mitch is a mama's boy who is always going to go through life disappointed that no woman he marries is her.

I thought the writing was great and always with just a word or phrase, Williams can depict so much with what is going on with a character. Probably the scene that was the hardest was when we get to the final confrontation between Blanche and Stanley which ends with Stanley raping her was hard. Because as a reader, things are set up enough that I realized that this was where Williams was going to go.

"We've had this date with each other since the beginning."

I hated that line though, probably because it is implied in Stanley's mind what he's about to do is welcomed by Blanche. And all because he wanted to totally destroy her and make her "see" that her life was a lie.

And at that point with the ending of the play and what comes I ended up hating the character of Stella. Because it was cruel and hard to read that poor Blanche who at that point is scared of Stanley and has told her sister what he did can't wrap her head around him still being in the apartment prior to her being carted away. We as readers know that Stella chose her husband and new baby over her sister and ended up not believing her. Or maybe she did believe her, but still chose Stanley over her (which is even worse).

The setting of New Orleans I thought was perfect for this play. I could imagine it hot, everyone sweaty, and being able to hear the crowd down below and the music coming up the stairs from the street.

I did follow up to see that the film version of A Streetcar Named Desire changed things up regarding the ending. I actually like Williams version better, maybe because it's more cruel and true to life. Though I do like the film version making sure that there was some punishment for Stanley.
Tweet