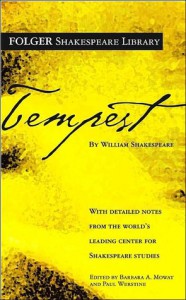 Even though I gave The Tempest five stars, it's still not quite up there with how much I loved Macbeth and Othello.

I would consider The Tempest the most romantic of Shakespeare's plays I have read so far. At least this one doesn't have people settling for those that they decide to make do with (Twelfth Night) or not realizing someone is not really dead so you kill yourself (Romeo and Juliet) or you use psychological warfare on another person to turn them into someone they are not (The Taming of the Shrew). There is also a really cool fantasy element in it that I liked.

The opening act of The Tempest shows a party (Alonso, Ferdinand, Sebastian, Antonio, Gonzalo, Stephano, and Trinculo) on a ship fearing for their lives during a storm that is about to blow their ship apart. That opening scene was so well written that I felt like I was on the ship about to be pitched into the sea. I would love to see this play in a theater sometime.

From there we go to Prospero and his daughter Miranda who live on an island and who have witnessed the shipwreck. Miranda wants to help those who were are injured, but then finds out that her father who is actually able to control the weather has caused the shipwreck to happen. We find out about Prospero's past and boy is it a doozy.

I have to say that I loved the character of Prospero. Prospero is always able to command a familiar named Ariel which seems to be a fatherly type relationship between the two of them as well. He was definitely a contradiction. He loves Miranda, but wants to avenge himself on the people that have betrayed him, though he still wants Miranda to be happy and does what is necessary in order for her to find happiness.

Miranda I felt for a little because part of me does wonder how much does she feel when she has insta-love with Ferdinand? He's the first eligible man she has seen ever, of course she falls in love with him.

Everything else that follows is Prospero doing what is necessary to ensure that Miranda actually gets married to Ferdinand.

People have commented that this is one of Shakespeare's most lyric plays and they are right. I could almost hear singing in my head as I was reading this play. The flow of the play were really good too. None of the acts felt too long or short. I was able to follow along with what was going on. Though having a Folger's version of this play always helps.

The ending was more interactive than Shakespeare's other plays, though I did wonder about Prospero doing an epilogue asking the audience to forgive him for what he did by clapping. It made me think of the stage plays of Peter Pan where Peter asked the audience to clap in order to save Tinkerbell. And I have to say, I am still puzzled at what wrong did Prospero do. His brother set him and his daughter off to die on a boat. I am all about forgiveness, but heck with that.
Tweet