The Good, the Bad, and the Undead 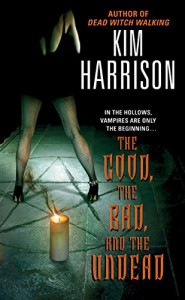 This is my buddy read of the Hollows series with Moonlight Reader.


As it stands I only like two characters at this point, and one of them is a murderer. The other characters are not smart, keep doing increasing dumb things, and are just awful. Besides the characters, the world building at this point makes no sense. We have another mythical creature coming out to play, and it makes no sense in the larger context of the world that Rachel lives in right now. Maybe if I cared enough I would have re-read some passages. However, there comes a point when you just want to be done with a book. I hit that point around 12:30 a.m.

Told in the first person by Rachel Morgan, The Good, the Bad, and the Undead, still has Rachel reeling from the events in the first book. Now working alongside vampire Ivy as an independent agency, she is still focused on bringing down businessman Trent Kalamack. When some witch murders start popping up in Cincinnati, Rachel thinks this is her chance to tie the murders to Trent, and bring him to justice.

The plot should have been fairly simple, but there were all these other plots (B, C, and I think a D in there as well) that were supposed to be part of the larger plot, but ended up making everything hang together badly. We have Rachel investigating a missing case, that then ties into some witch murders, which leads to a revelation about a demon, which is kind of linked to why Ivy keeps hulking out on Rachel, which turns to Rachel finding out about a friendship her father had with someone she hates, which is the house that jack built. I am being facetious here, but seriously, it was a long winding road to the end.

It always sucks when you don't like the main character in the book you're reading. I really don't like Rachel at this point. Maybe it's because she's not that smart, and keeps apologizing to the wrong people when situations arise either of her own making or the other persons. And I can't stand to keep reading these books if every time Rachel gets out of sorts, it sets off Ivy, and then Ivy tries to feed on her by force and Rachel manages to save herself or someone else comes along and saves her. Long story short we have Rachel once again apologizing to Ivy once she vamps out and tries to force/kill Rachel. If it wasn't for Rachel's boyfriend Nick riding to the rescue, Rachel would be toast. And how does Rachel repay him?

Are you sure you're all right? he asked, his hand buried deep in my hair as he held me.
I pulled away to look at him.
Yes. Thanks. Where's Ivy?
He didn't say anything, and my face went slack in alarm.
She didn't hurt you, did she?
His hand dropped from my hair.
She's on the floor where I left her.
Nick! I protested, pushing myself away from him so I could sit straight.
How could you just leave her there?

If Rachel was a real life person and I knew her, I would probably be arrested for shaking the life out of her. Seriously? You don't have a problem that for the third time in three months your roommate has tried to force you to accept her enough so she can bite you? Bah to you.

And I honestly don't know what Ms. Harrison was going for her in the longer context of this novel. Rachel is like a 2 year old that can be distracted by a bright shiny thing. Every few seconds I felt like she was feeling drawn to someone else and she was in a relationship. The ending with her having some sort of revelation about what happened to some mythical creatures just made me roll my eyes. Even broken clocks are right twice a day. I am sure that is going to be followed up in some subsequent book.


Jenks and family were the only bright spots in this book. Can we get a spin-off with them? Maybe there is one. I will investigate. Jenks has more heart, more intelligence, than either Rachel or Ivy. And I love hearing about how pixies and fairies have been warring for centuries. I am way more interested in them, then the witches, vampires, and demons running around in this book.

Nick who I was rooting for initially, is just as dumb as Rachel. (Spoilers for book one) In the last book Rachel found out that brainiac was summoning a demon. Because of this they both have demon marks on them due to Nick using the demon to save Rachel and the marks are seen as debts until repaid. Well we find out that Nick is still trying to learn from the demon and get it to do what he wants.

And Rachel who has the common sense God gave a gnat knows this is a bad idea but you know, just kind of sits back and let's Nick do what he wants. Because of a mess-up because neither of these two are intelligent, there is a change to Nick and Rachel's relationship. The book leaves things up in the air, however, I don't care enough to see if they work it out.

Trent from the last book is the only other character besides Jenks that I liked. Readers know (spoilers for book one) that Trent was behind a death in the last book. However, he's not an idiot and we find out what has actually been going on and it links back to the goings on in book one.

The world building got a bit clunkier in this book. I think the problem was there were too many creatures to keep track of and what their triggers were. We had weres, vampires, pixies, demons, witches, etc. We also had some explanations of ley lines, and familiars. After a while I felt like I was being force fed an instruction book on witchcraft and got bored.

The flow from chapter to chapter was a bit off in places too, and I think that things would have been better if there had only been that one plot that may have led to some revelations, but not everything that was thrown at us in this book.

I have no further urge to read what happens in the Hollows. I am sure that somehow Rachel will get bitten by Ivy. Rachel will apologize for it. Rachel is probably going to end up with someone totally unsuited for her. And she will almost die like a million times.
Tweet