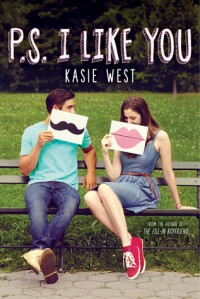 Please note that I gave this book 3.5 stars and rounded it up to 4 stars on Goodreads.

So all in all I really liked this book. It was cute, and was a great little homage to You've Got Mail, which was a great homage to The Shop Around the Corner. I read this for Romance Bingo 2017 and this fits my Young Adult square.

Told in the first person, we have Lily, a teenage girl who has a chaotic (but loving) home life, and only has one best friend. Lily plays guitar and tries her hand at writing lyrics, but mostly she keeps to herself while clashing with her best friend's ex-boyfriend who treated her badly. After writing song lyrics on her Chemistry desk, she comes back the next day to see that someone has written the next line on the desk, and from there she starts exchanging notes with an unknown boy at her school who she finds gets her, and she really gets.

I liked Lily cause God knows I grew up in a family where I could not get five minutes of myself alone. She's a loner, but has her best friend who she loves and who is always there to cheerlead her on. Lily is a hipster I would say, but an unaware one based on what everyone else says to her. She loves music, indie rock mostly it appears. And she has a guitar and is trying her hand at writing lyrics. When a song writing contest opens up to Lily, she finds herself blocked for a bit until she and her mysterious pen pal start trading back notes to each other. Based on the things he tells her, Lily finds herself writing about the things he makes her feel, but also about his loneliness.

What I thought was smart was that West allows us as readers to see the back and forth between Lily and her mysterious pen pal. You can see why she's falling for this guy (whoever he is) and you see how vulnerable both of them are being while revealing things about themselves. I did laugh at bit here and there though, cause I cannot imagine a teen boy (even if he was anonymous) discussing some of the personal stuff that Lily and him discussed.

I do have to say that some of the secondary characters could have been built up a bit. Lily's best friend (I ashamed I forget her name) was not really there except to be her wise friend and be totally understanding at all times. It pretty much comes out repeatedly that Lily's friend broke up with her ex because he and Lily could not get along. Then there is a complete re-write to the whole thing and just made me roll my eyes.

The mean girl was so one dimensional and "evil" it just made me shake my head. Has high school gotten worse? I can't imagine people like this at all. We had some bullies at school when I was growing up, but thank God the teachers/principal didn't put up with it and made sure those people were suspended and dealt with. Heck two boys I went to school with were flat out expelled for what they were doing to people in class.

The pen pal didn't take long for me to figure out at all. You watch "You've Got Mail" and you can pretty much figure out who it is. What I did like is watching Lily having to cope with finding out who the guy is that she fell in love with via notes.

All the feels. I love Tom Hanks. That is all.

I liked the writing. Lily's family scenes were freaking hilarious at times. The pacing moved okay too, though the end felt rushed as anything. There is a big incident at school and then it felt like it got resolved ten seconds later.

The ending didn't stick the landing though. I would have liked to see what happened with Lily and the song writing contest she entered. Having an epilogue that said six months later would have worked wonders.