The Girl in The Steel Corset 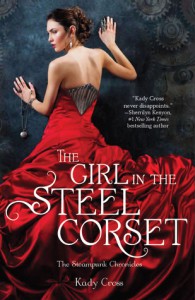 Not a lot to say besides I really liked this book. I thought it mixed together the elements of steampunk and the Victorian Age very well. I loved the characters, and I loved how Cross added in Gothic elements as well by using inspiration from some stories we all know and love (Frankenstein--well I hated that; Jekyll and Hyde--ditto) and threw some twists in.

"The Girl in the Steel Corset" included a nice little backstory to the character of Finley Jayne. From there it goes into the longer story that has Finley meeting other characters I assume we are to follow for the rest of this series.

Finley's backstory gave us enough of a glimpse to know there is something about her. You don't know what. But at times she feels like she is two people trapped in one body. The short story that began before it included the longer story was so good. I loved it and wish we had followed up with characters introduced in that. When we catch up with Finley again, she ends up fighting off a young lord of the manor who thinks he can take her and do what he wills. When she flees after injuring him, she runs into Griffin King and his friends who are doing what they can to defend the country (England) against outside enemies.

Besides Finley and Griffin, we also have Emily, Sam, Jasper, and a young man called Jack Dandy. We quickly find out that Griffin and his friends (Emily, Sam, and Jasper) are out to capture a man/woman called The Machinist who is behind several crimes that took place involving automatons. However, suspicions turns towards Finley for maybe being involved with the Machinist when things start happening that shows that the criminal is out to get them.

Even though this is a Young Adult book (and yeah I had no idea when I borrowed it from the library) this book reads much older. I didn't even realize the characters are teenagers until I saw someone's age mentioned. That's not a knock against Cross either, it was delightful to read young adults who actually for the most part had sense and thank goodness two love triangles reared their heads, but one was absolutely resolved and I think the other one is too for what it's worth.

The only complaint I will say that I really did have is that this book was a bit too long. I know that Cross had to set up the other characters and do world building though so it's to be expected in the first book in a series. I just honestly didn't need the story to be swinging back to much to Sam. He got tiresome after a while. I do wish we had spent more time with Griffin's aunt on her adventures though.

The setting of a Victorian age with steampunk (think automatons walking around, things people cannot see that are little machines that can repair, people having eyes replaced, etc.) really hit the sweet spot for me.

The ending leaves things in the air for some people. I am definitely going to continue this series to see where it goes. 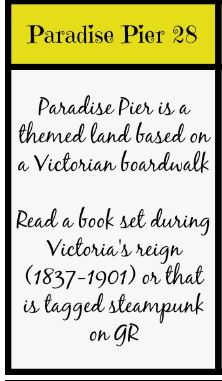