What a Weird Book 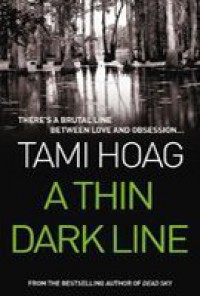 What a weird book.

This doesn't even read like a Tami Hoag book. The main plot is a mess (investigating assault and murders of women) with multiple character POVs. I don't get the romance between Annie Broussard or Nick Fourcade. The setting of Louisiana could have been interesting, but ultimately fell flat. I just couldn't get behind Nick being an abusive police officer and Annie getting harassed by her fellow officers for daring to do the right thing.

I forgot I had "A Thin Dark Line" until I started rummaging through my bookshelves. I honestly didn't recall a thing about this book either so even though I had this book for years, nothing came back to me as I reread this.

Annie Broussard is a deputy looking to eventually become a detective. She finds herself fascinated by Nick Fourcade who is a loose cannon on the force. When Nick lashes out at a suspect, Annie steps on to stop the assault. This leaves Annie with a man who becomes obsessed with her. Nick also becomes obsessed with Annie initially thinking she is part of some conspiracy to ruin him.

I didn't really like any male in this book. Annie deserved better than Nick. In the end I think we're supposed to think Annie will keep Nick on the straight and narrow. Annie is put in danger repeatedly by her fellow officers and gets crapped on. She has an old flame try to tell her what to do and push his feelings on her. Maybe if Annie had a strong female relationship it would have helped balanced the overly masculine POVs.

I didn't believe the person who ended up being the suspect. It just read as false and something to throw out there. And I hated how things ultimately got wrapped up.

The writing was so so since we had multiple POVs. And we had Annie investigating and being harassed and Nick barely doing a thing it felt like. The flow was off. I found myself getting bored at parts. There were so many red herrings in this I just didn't even care at the end who was responsible for what.

I read this cause Hoag has a new book coming out that is a continuance of this series. Hopefully it's better than this.