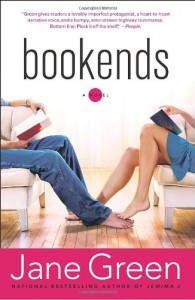 I finished my re-read of this a few days ago, just didn't have the energy to post a review. I think the main issue I had was that the re-read was a bit of a bust. Probably because this wasn't as chick-lit as I was hoping. There are some serious issues here (discussion of HIV and AIDS) but also there is some mean-girling crap that goes on that just didn't fit the characters who were supposed to be adults in their 30s. The main character of Cath just reads as a doormat throughout this book and I just wanted her to be stronger and push back on people more. The ending was okayish, just not great.

"Bookends" has Cath and her best friend Si dealing with being unlucky in love. Living in London they seem to be going through the motions of things. Cath refuses to try her hand at love again after having her heart broken and Si is desperate to meet Mr. Right even though the men he is usually with are terrible.

Cath and Si have boring, but familiar get togethers with their college friends Josh and Lucy and things seem to be carrying along fine until a woman (Portia) from their college days pops up again.

Most of the book is Cath thinking about Portia and how Portia supposedly held them all together until she broke up their friend group. What gets me though is that when we readers finally get a glimpse of Portia, she's not all that Cath (or Green) makes her out to be. There is no there there, and I wanted there to be better development of her.

Cath stumbles upon a love interest that wasn't that interesting and Si ends up with a shocking new way of life after a betrayal. The book just ends up taking too many things on and not doing them well.

If the above isn't enough, we also have Cath trying to open a bookstore.

The writing is typical older Green (when she wrote her chick lit books taking place in London). This just doesn't read or feel like chick lit. The flow is okay, though going back to past and present was a bit much.

I guess I was just put out by the whole lesson to be learned about real friends that people who should be old enough should already know at this point.