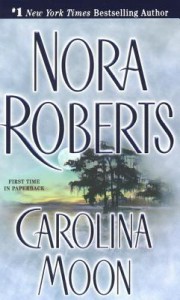 I dithered about the rating and thought about giving this book four stars. However, the romance between Tory and Cade didn't sit right with me (at least the initial stages of it--I can't take it in romance novels when the dude bullies the heroine into being with him) probably cause of the insta-lust on his side of things. The mystery aspect of the book was interesting, though how Roberts tried to work in Tory's ability to "see" things didn't really work for the most part of the book for me. Probably because I have read of too many cases about faux psychics for me to be really fall into the story the way that I should have. I do wish that Tory's character had been a bit better developed. I don't know how or why she got interested in selling high end jewelry and other items. Also Roberts skips over her New York years and she info-dumps on Cade about what happened to her there. I do think her burgeoning and then friendship with Faith was a highlight though.

"Carolina Moon" is a good book if you want to use it for several Halloween squares. I think this would fit "Terror in a Small Town", "Terrifying Women", "Romantic Suspense" and even "Southern Gothic."

"Carolina Moon" follows Tory Bodeen. Tory ran away from her abusive father and emotionally absent mother as soon as she was able to. After something mysterious happens to her in New York that has her running from there, Tory returns to her hometown of Progress, South Carolina after a few years of building up her savings and working.

Returning to Progress is an issue for Tory though. When she was 8 years old, her best friend, Hope Lavelle was found raped and murdered. Many people in town believe that Tory left Hope to her fate in order to get away from the man that ultimately killed her. Very few know that Tory has an ability to see visions of people and knew when Hope was being killed. Now that Tory is back in Progress, the murderer is intent on making sure that Tory will not be able to name them. On top of that, Tory starts a relationship with Hope's older brother, Cade.

As I said above, Tory as a character doesn't have a lot of there there until the middle and end of the book. We hear about how her father abused her. How her mother stood by and did nothing. We also know that she has a caring grandmother, aunt, uncle, and cousin. Besides Tory interacting with her grandmother and uncle though, it seems as if she is pretty adrift. When you read about what happened to her as a young girl and then when she went to New York though I sympathized. I just wish that she had more of a backbone when dealing with Cade.

Speaking of Cade, I felt uneasy with the romance in this one. Maybe because the character bullies Tory into going out with him and then gets angry if she doesn't tell her what she is thinking and feeling all the time. Him going around calling her his woman made me roll my eyes too. I saw shades of Roarke in this character so maybe that's why he read as familiar to me while I was reading. And just like Tory, his character doesn't become more interesting until about the halfway point. You find out just how cold his family (specifically his mother was) was and is and how he had to go about proving himself constantly. His showdown with his mother was really good and I am surprised Roberts didn't try to have them fall into each other's arms and love each other. It was more realistic with how she wrote it. The romance scenes between him and Tory read similar to Eve and Roarke a few times.

Faith and Wade are the second couple in this book and a few times I thought it would have worked better if they were our main couple. Faith doesn't put up with a lot from people, but she loves her brother. It was interesting to see how her life was affected by her twin sister's death and knowing her mother wished it had been her that died. Cade and Faith had some hot romance scenes, but not too many which would have gotten boring.

There are secondary characters in this one, we have the local sheriff, the town mayor, Tory's uncle and aunt, her grandmother, Cade's mother, etc. Roberts does a good job drawing them out little by little, I just wish that we had gotten a better ending with this one. An epilogue would have worked nicely.

The writing was typical Roberts. This was written back in 2000 though and at times the book appears dated. Roberts talks about two characters with one being a Republican and Democrat and it's quaint to see them as having fiery debates, but who are really good friends. Oh the days before Obama came along and divided the country (said sarcastically I just got into that the other day with someone who says Obama was a worse divider than Trump since we didn't have these problems in this country until he was elected). I did laugh at another line about something being as likely as being a liberal Republican.

I also think that showing that the family housekeeper Lilah was essentially the real mother of Faith and Cade didn't sit well with me. Way too mammyish for me. She also has a little dialogue with Faith at one point about the murder girl allowing the man that rapes and murders her and it definitely sounded a bit victim blaming to me.

“Letting a man into your house doesn’t mean you want him to rape you.”

“Didn’t say so.” Lilah colored her lips, rubbed them together.

“Just saying a woman’s got to be careful. You open a door for a man, you better be ready to boot his ass right back out again.”

Or how about men don't come to a woman's house and rape them.

The flow was uneven at first, but improves towards the end. Once the murderer starts killing and raping again the book turns fully into more a suspense book though.

As I already said, the ending wasn't what I think we should have ended with. It was quite abrupt and I felt like I was missing a few pages. 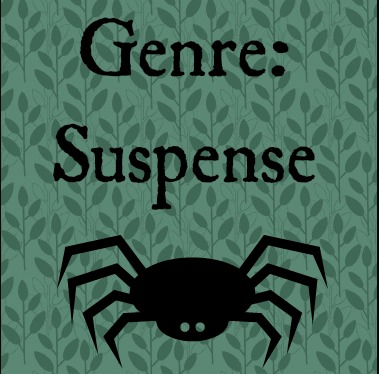