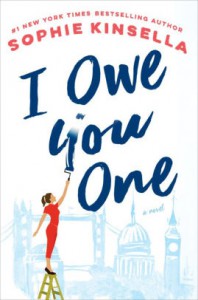 The main reason why I didn't give this five stars is that Fixie bugged me up until almost the 50 percent mark of this book. She was a pushover and I noticed that both times she got swept up in a man, that's all that mattered. I also thought the ending was a bit weak with the mother not being informed about all that went on. I think that would have been better going forward for the family. Maybe there should have been an epilogue of six months later or something.

"I Owe You One" follows Fixie Farr. Fixie works alongside her mother and her siblings (who show up some of the time) in their family business. We find out that Fixie has an overwhelming urge to fix things and can't sit still if she sees anything out of order. This ends up leading her to meeting a man named Seb who asks her to watch over his laptop while he steps outside to take a phone call. Fixie ends up seeing that Seb's laptop is about to be damaged and puts herself in the way to keep it safe. That act has Seb providing her a written IOU on a coffee sleeve asking her to please come to him if she ever needs anything. And suddenly one day Fixie has a need to call in the IOU.

All in all I thought this book was a great standalone. I do love to read Kinsella's older books from time to time, but her newest books are a lot of stronger in my opinion. That said, Fixie kind of sucks for a bit of this book. Fixie is obsessed with her late father's saying that "family comes first" so she has allowed herself to be a doormat to her siblings demands. Why her mother doesn't say anything baffled me and I ended up not feeling warm and fuzzy about her after a while either.

Fixie also harbors a longstanding crush on her childhood friend, Ryan. Though everyone and their mother sees that Ryan is just not that into Fixie, she decides to go all in with the guy when he returns from living in LA talking about how feckless Hollywood is. What surprised me though is that Fixie's recollection of Ryan is a golden boy, but her best friend and even her sister point out the guy dropped out of uni and was not that smart. When Fixie uses the IOU with Seb to help Ryan get a job I maybe shrieked. Things don't get any better when all of a sudden Fixie, her brother, her sister, and her uncle are left alone for a couple of months to run the family store. All of a sudden Fixie is a mess and obsessed about her whatevership with Ryan.

The other characters pale a bit though. Ryan should have someone following behind him at all times saying "douche."

Seb was okay, but honestly I don't like how the friendship/relationship progressed. And I don't know...he was definitely more developed than the character of Luke Brandon in the Shopaholic series. But there are a lot of things that happened with Seb that bugged me and I don't want to spoil for other readers.

Fixie also has a longstanding fear of her brother Jake and honestly I didn't like him at all. The book's message about standing by people who do terrible things because of family made me cringe. Sometimes you have to not enable and or be a doormat to people and just move on from them. And the recollections of the things that Jake did had me disliking the character from beginning to end. His transformation felt phony to me.

Fixie's relationship with her sister wasn't much better. Which made me wonder why her father was so adamant on family first when two out of three of her kids sucked.

Fixie's best friend and her marriage problems were interesting though. I cracked up about how that got resolved.

The writing was very good and the flow worked too.

The ending didn't ring very true to me though. We have everything all working out, but one wonders what happens the next day when the mom in this family finds out what has been going on.

romance Contemporary Sophie Kinsella i owe you one