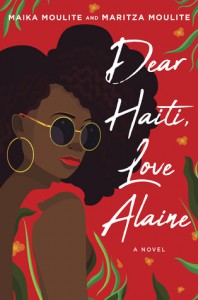 So disappointed with this one. I was hoping for a book that explored the history of Haiti in a modern setting. Too bad that this book was all over the place. The authors chose to tell the story via Alaine (a 17 year old Haitian descendant of some of the founding mothers of Haiti) but decided to have everything be discussed via journal entries, text messages, newspaper stories, letters, emails, etc. It was too much. Also some of the text was in red. I have no idea what that was even about. It was distracting and I was unable to concentrate through the whole thing.

The idea though that Alaine's family is dealing with a curse was too much. The whole book got a bit ridiculous after she gets to sent to Haiti for a school prank that could have killed someone. I think that's the biggest issue I had with Alaine. She doesn't see that she has caused issues and wants to be able to blame anyone else for things that she has a hand in. Due to the writing style I wasn't able to gel with her as a character. Everyone else reads like a caricature at times.