A Fry Cook With Heart 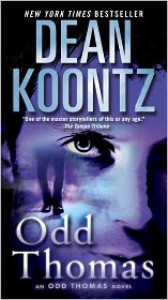 I was in the mood for a long cry so I read this book. Yes, I know how that sounds, but it's true. I first read Odd Thomas back in 2003 when it was first published. I had just moved to DC and was reeling from having to move after just burying my mother the month before. So reading this book I had no idea what was coming. Dean Koontz at that time was a comfort read for me. I loved to read his books and he was up there with Stephen King as autobuys. This was before Koontz descended into the dogs all the time and perfectly beautiful flawless female characters he has in all of his books. Oh and everyone being a military expert with guns. Anyway, back to Odd Thomas. This book hit me in the gut back then and I think I just cried for hours after finishing. I was surprised by this book in a good way and afterwards ended up reading the entire series. Too bad the series ended up going downhill in quality. I often think that Koontz should have just left this alone and let Odd Thomas be a standalone. I will eventually go back and re-read the earlier books since my reviews that I had written are no longer on Amazon.

"Odd Thomas" is told in the first person POV by a character named Odd. He's just a fry cook who has a great girlfriend named Stormy, and has a straight forward way of speaking and thinking. Odd is a bit different than other people because he can see ghosts. And what he starts to see in the town of Pico Mundo is going to change his life forever.

Since I have read about Odd through 7 books and one novella, I have to say that I know this character very well. When I first read this I thought how unique the character sounded and acted and just loved him. My re-read did not change that. He still is very unique and precise in the way that he thinks and speak. There are some  parts of him that remind me of other characters that Koontz has written (Christopher Snow, "Fear Nothing" and Curtis, "One Door Away From Heaven"). Odd sees things that he calls bodachs and also has what he calls psychic magnetism that pulls him to people or places where something may occur.  When Odd starts to see a huge amount of bodachs around Pico Mundo and feels pulls toward a mysterious man he and Stormy try to figure out what is going on.

The other characters in this book pull you in. I loved the relationship between Stormy and Odd. You figure out eventually why Stormy is the way she is, and why she loves Odd.

There are other characters who are going to appear in the series so it's good to get a sense of them now, those like Chief Wyatt Porter and Little Ozzie.

The writing can be a bit wearing after a while I think. You just want Odd to get to the point quicker, but I think in this first book it was charming and it allows you to stay with the character and get to see other people and places through his eyes. The flow was actually pretty good. In his most recent works, Koontz's chapters have been laughably short and always seem to end on a dire note. That gets old after a while.

The setting of Pico Mundo seems very eccentric.The people that live there and one of the ghosts that visits Odd (no spoilers) cracked me up here and there.

The ending is a definite gut punch that I was surprised that Koontz went with. His books tend to end on happy notes for the most part. This definitely made me think of King though since he's something he would have done and went merrily about his way.