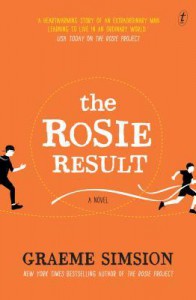 Here's a link to my second review in this series: The Rosie Effect. I flat out disliked the second book and was flabbergasted that Simsion changed things up to having Rosie and Don move to New York and having Don and Rosie act of character. Thank goodness that is all fixed in the third book with us following Don and Rosie eleven years after the birth of their son Hudson. Simsion also kept force fitting in the character of Gene (who I disliked) and we find out what all happened there. I think that this book definitely shines a lot more and we finally have Don coming to realize that he doesn't have to be labeled something he doesn't want and if he does, he can own things in his own way. We get to see he and Rosie actually working as partners. Things that didn't work for me was the parents of Blanche. That whole story-line was wonderfully handled, but the ending it just seemed that people are all going to just wait for something worse to happen. Also, I think that we didn't really get a satisfying ending with the woman who caused Don to get in trouble at university. I guess I don't like the idea of someone trying to use racism to get some hits on their blog and who we get to see acting like a racist jerk later in the story.

"The Rose Result" follows Don and Rosie as they move back to Australia with their 10 year old son Hudson. Moving from New York back to Australia has caused some difficulties for the whole family. Rosie has a change to be on a great clinical trial but her being a wife and mother is holding her back due to the sexism of the head researcher. Don goofs badly when talking about racism in his class and his lecture goes viral. From there he is at loose ends on what to do. Hudson is having problems in school and seems to have no friends and his teacher and principal think he may be autistic.

We once again get the story told via Don's POV. We have plain speaking Don back and for once he's not trying to be sneaky or do things that he would never have tried in the first book. He and Rosie are more partners in this one with them both trying to deal with work and parenting. I also thought that there is a little hint there about why the two of them have fallen off a bit with their love-making, but it's not followed up with which I thought was rare considering the character of Don.

We also find out about some of Don's longstanding friendships with Claudia, Gene, George, and Dave. We still have Don wanting to "fix" his friends, but for once he doesn't try to meddle without discussing it. And I have to say that we get a better insight into his relationship with his father. And I loved Rosie's relationship with her dad in this one too and honestly how many people loved the Tillman family.

The biggest thing I thought was that this book challenges stereotypes of those who are autistic. We know that Don has refused to be labeled and has danced away from that in his life. However, now that things are going badly for Hudson at school, Don is focused on the Hudson Project and Don quits his job and works on ways to make sure that his son doesn't suffer as he did as a child and adult. I thought this was so good and I loved how Simsion handled it.

The secondary characters are very good in this one. I really liked Hudson a lot and thought that he was a really good and thoughtful kid. His budding friendship with two kids in his school were great (Blanche and Dev) though I really really disliked Blanche's parents.

And we get Simsion doing a great job juxtaposing another family to the Tillman's. Blanche's parents don't believe in science, refuse to have her vaccinated, and all signs points to her father abusing her mother. I really wish that some things had gotten a bigger push by Simsion. The vaccination thing really ticks me off. I have had to personally decline to go over to people's homes who don't vaccinate their children because my stomach condition can flare up worse if I get sick with the flu and studies have shown that with full vaccination (I am) it gets better. Obviously people who can't get vaccinated due to their own medical conditions is a different thing. Okay, off my soapbox now.

The writing was great. I think that the last book lost something with Rosie and Don being in New York and this book brings back all that heart that was missing. The flow was very good though I got confused about how terms/schools work in Australia.

The book ends I thought on a good note for Hudson though I wish things had been better resolved on a lot of fronts (Gene, Blanche's parents, what Hudson did/didn't do, and Don's new job).