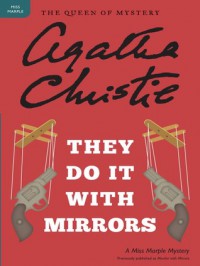 I just loved this from beginning to end. As someone else said, I love it when Christie provides a diagram to show where a murder is. It's like you have your own game of Clue to play. Miss Marple is still the sharpest knife in the drawer. I can't say that I saw the ending at all. I was leaning towards one way and then found out I was wrong. The ending leaves things on a nice note for several of the characters.

Miss Marple is asked to go visit an old school friend, Carrie Louise Serrocold. Carrie's sister thinks something is wrong at her home and can't figure out what is going on. Carrie's second husband, Lewis Serrocold has turned their home into a school for wayward (or as someone people say straight criminals) boys. Since Miss Marple has something of a reputation for solving crimes, Carrie's sister thinks she can figure out what is going on there or if she's just wrong about something going on.

Miss Marple heads to visit Carrie and quickly figures out there is a lot going on. A young man named Edgar Lawson is running around accusing others of spying on him and that his father is really Winston Churchill. Two of Carrie's step-sons, Steven Restarick, Alexis Restarick seem to be in love with Carrie's granddaughter, Gina. Too bad Gina is newly married to American Walter. And then Carrie's only living daughter believes that Gina's married beneath her and that Walter is up to something. When one of the trustees of Carrie's first husband's foundation is found shot to death during an argument everyone wonders who could have done it.

Christie I thought did a great job of setting the stage so to speak. I definitely didn't know who did what or could have done it. Miss Marple I thought was great about realizing in the end that she was looking at things wrong. As a reader, I realized I was too.

The writing was okay though the flow was a bit much in some places. I think that things moved faster when Miss Marple was involved in any of the goings on.

The setting of Stonygates felt like a very worn house. You have Miss Marple and even Walter seeing how badly run down things are even though there is enough money to fix the place up. It feels like a place out of time when you read about how little Carrie and her husband seem to care about the grounds and the rooms.

The ending was a bit rushed though. We read about what happens via a letter that someone sends to someone else which I thought was a bit of a cop-out. I would have liked to read it via Miss Marple's POV I think.