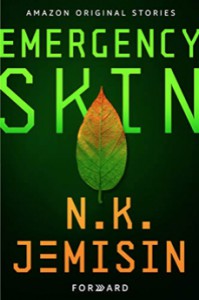 Definitely going to read the other stories in this collection. This was a wonderful way to pass the day in bed on Sunday. Also this weekend in the U.S. we should be seeing a  cool down. There is even snow happening in some parts. And as for me I am going leaf peeping. So this book was the perfect thing to read especially with the discussion of climate change going on.

So "Emergency Skin" follows an unseen narrator talking to someone who is going back to someone placed Tellus. The narrator reads as more robotic than anything as does the person they are conversing with. We quickly realize though that Tellus sounds familiar. We find out quickly, how Tellus inhabitants were left to die when the planet started to die, but now the narrator is forcing person #2 to go off and find something that is needed. Once they do, they will be given an emergency skin.

I don't know what to call the narrator/consciousness character besides an ass. The character I call Person #2 I was intrigued with and wanted to find out more about. We do get an information dump via a secondary character which almost made me mark this down by a star, but I just let it go. FYI I loathe information dumps via characters.

I have to say that so far this writing was intriguing and I wished that Jemisin had written more. This was the shortest story in the collection so far. I had so many questions. I was interested in reading about the "Founders" who would probably have loved Gilead. I also thought it was funny how the narrator was negative towards anything Tellus.

The setting of this book was intriguing especially once Person #2 starts to go around Tellus. It's also interesting how the narrator/consciousness was derisive towards the "skin color" of the people of Tellus that were met by Person #2, how they didn't like anyone that was "fat", disabled, or old. Apparently people are still racist and ablest in the future. Also to read how the Founders created "skin" and what that led to creeped me out.

I loved the ending especially when I figured out who the Founders were.