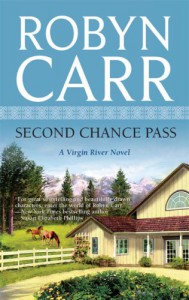 Woo boy. This one really didn't work. The main couple (Vanni and Paul sucked) but Carr decides to force in romances for a friend of Paul and Vanni's and then we have too focus on Jack and Mel, and then we have Walter and a retired Hollywood actress, and I know I am blanking on someone else. We have appearances by Mike, Preacher, and Paige. I have no idea why Carr didn't focus on the main couple. And I have to say that some of the asides in this book about how Jack doesn't feed firefighters who are the "felon" squads ticked me off. Sure, these men are out there trying to keep your home from burning, but don't deserve free food. Carr ticked me off again when she has Mel pro home birth and doesn't talk about the dangers at having home births. We do have something happen, but it's like a blip and forgotten. This book went on way too long. Was so glad to be done with it.

"Second Chance Pass" has Paul Haggerty reeling from the fact he has fallen for his best friend's now widow, Vanessa Rutledge. He has been there and helped Vanessa as she's now trying to raise her baby son and is scared if he tells her how she feels, she will reject them. However, something from Paul's past may cause the couple more problems than anticipated. We also have Mel and Paige both pregnant and readying themselves for their births. The book jumps around to too many characters for you to get a sense for anyone. Vanessa started to annoy me and definitely bugged me after she got on Paul's friend Joe's back about him starting up a romance with a friend of hers who acted like a loon.

This was the first book when I started to get a bit turned off by Virgin River and it's characters. I felt that too many of them were so aggravating I couldn't imagine being around them for more than 5 minutes. Jack is in everyone's business and he and Mel are similar to a soap opera super couple.

There was no real tension in this one I thought. Just a lot of people being dumb about getting together with each other.