One of Us is Next 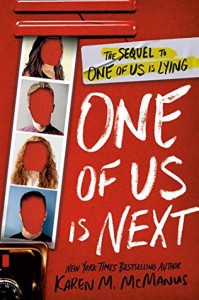 What a ridiculous ass book.

Okay. I am going to say something more substantial. I have eaten flavorless oatmeal that had more to it than this book. Character development is non-existent. You get to see characters from the previous book briefly, but we don't get to get into their heads. McManus decides to bring in a new crop of people for the most part that I didn't care about.

I saw the twist coming as soon as a certain scene happened. And then I saw the next twist after that. Nothing was a shock and the why behind this was not even believable.

I had a huge problem with her last book, "Two Can Keep a Secret" because she has young adults acting in ways that other teens would scoff at. The whole truth and dare game made zero sense. But how did no adults even hear about it? Seriously? Considering social media today no one talked about it for this to get discussed?

The jumping back and forth between 5 or I think 6 characters did not help matters either. There is zero tension going on. There was some tension in the first book because people were accusing teens of murdering their own. The murder in this book happens I think more than halfway through and I ended up loathing the characters so who cared in the end? Not me.

The romance between all of the leads were lame and I didn't care about who ended up with who even a little bit. I think McManus was trying for some epic romance up there with Logan and Veronica with two of the characters and I was over it.