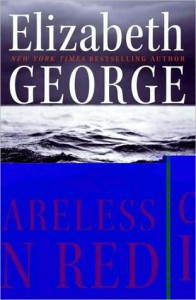 "Careless in Red" finds Thomas Lynley walking in Cornwall. He has been on his own for 6 weeks at the start of this story trying to outrun memories of his dead wife. When he comes to a cliff he sees a body and finds himself thrust in the middle of a murder investigation. The local investigator calls on Lynley to investigate a woman who is hiding something. Lynley eventually calls up Havers who is sent to Cornwall to help, but to also bring Lynley back to New Scotland Yard.

I got nothing on Lynley. He's like a shadow of his former self and his whatever it was with the vet made zero sense and actually made me despise him.

Havers was great and the only reason why I gave this 1 star.

The local investigator had a whole backstory that I did not care about at all. So did the vet and it made zero sense when we get to her reveal. It was so dumb and I just threw up my hands.

I can't say much about the other people in this story, the lot of them had a lot of issues and there's not really anyone that I ended up liking. At one point I wondered how everyone in this story was so miserable and unhappy. Some of the characters, read as caricatures.

The writing was dry and the flow was awful.

The ending was a letdown. Readers and the police know who did it, but I really wish the book had ended differently. Lynley holds a massive resolution to a murder case that occurred 25 years earlier and it made no sense that he didn't tell anyone about it, or at least to tell what he knew to the person behind this murder. The whole book felt like a rough draft.