A Touch of Gold 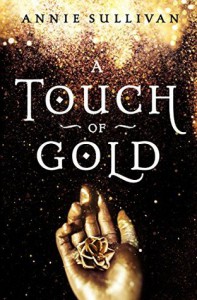 I waffled on 2 or 3 stars, but honestly I was bored out of my mind for the most part while reading this, so 2 stars it is. I liked the idea of a story focusing on King Midas's daughter, but everything with the pirates, the power of her touch, etc. just dragged. I think the world building could have been better (we hear about Dionysus, but what about the other gods) and also Kora's supposed power. The romances felt pretty weak too.

"A Touch of Gold" tells the story of what happened to King Midas after he got the power to turn things to gold. Hugging his daughter he turns her to gold. When he begs Dionysus for help, he is told to wash everything into the ocean/sea (I can't remember) and do it for everything that he turned to gold. King Midas does, and he restores his daughter Kora back to living flesh. However, he forgets a few items and is cursed forever, she is too, she is a golden maiden brought to life. Ten years later we follow Kora as she has another potential groom paraded in front of her. When she finally thinks she has met someone who can stand to be around her, her father's gold is stolen which leaves him incapacitated. Kora and her cousin Hettie go on a wild adventure to save Kora's father and the kingdom.

I did like Kora, I just wish we had spent more time with her before we find her as a young adult and then dealing with her mooning a bit over the first of the two romantic potentials in this book. She did get more interesting as a character towards the end though. Her cousin Hettie was a delight and I think this would have been a 5 star book if it focused on her.

The two romantic heroes were blah. Sorry, I didn't like either of them though the twist with one of them I did not see coming.

The writing was a bit off for me since the dialogue was dry. I just needed something more going on there. I just needed more thing to be happening besides Kora reading a diary, feeling romantic, and eavesdropping.

The setting of the book really didn't feel like it took place in one of the Greek myths I read as a kid. It's weird that at times the book read as modern or in another part of the world other than where King Midas's story was drawn from which I think is considered modern day Asia Turkey.

The ending leaves a potential wrinkle in Kora's future which is why I assume there is a second book in this series.