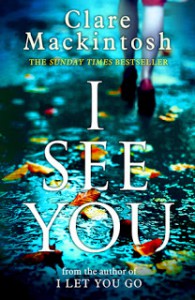 Honestly this book was dancing towards 5 stars before we got to the two reveals/twists and I went seriously? They are not explained very well so I just didn't think they fit the book at that point.

"I See You" follows two women (Zoey Walker and Kelly Swift) and an unknown narrator. When Zoey sees a picture of herself in the local paper along with an add to a dating site she wonders what is going on. When Zoey realizes that a few days earlier she recognizes the woman in the ad she calls Kelly (a PC working in London). The two women start to wonder what is going on with women having their pictures put in ads and what it may have to do with some recent attacks of women. The unknown narrator gives us insight into what is going on and why.

Zoey is a single mother two two children and lives with them and her partner, Simon. Zoey we quickly find out divorced her husband almost a decade earlier after finding out he cheated on her. She meets Simon around a year or two later and then he moves in with them. It seems her daughter Katie gets along with Simon, but her son Justin does not. Zoey at times I found hysterical and fairly exhausting. She is rightfully stressed but her character flips over minor things and also seems to be a helicopter parent excusing her son's issues while trying to force her daughter to get a 'real career." When Zoey starts her own investigation into things, she starts to wonder if someone close to her is behind the ad.

Kelly is a PC who we find out was demoted after an incident with a suspect. I actually liked Kelly's development here. We find out that an incident involving her twin sister has haunted her and Kelly definitely steps over the line throughout this case as well. I liked that she had a mentor and supervisor telling her she doesn't get to tell victims how they need to be/act. Kelly was being judgmental about a lot of things and it was interesting to read how she slowly starts to realize that she can't push people to do things just because that is what she would do.

The unknown narrator sounds like a psychopath. When we get to who this really is though I went really and moved on.

The other characters in this book are developed as well and I think Mackintosh did a good job with setting them up into the main story-line.

The writing was interesting and I liked the details on how something like this could be possible. The flow worked too I thought.

As I said earlier, the book pretty much slid down once we get to the reveal. It didn't make any real sense at all. Then we get a twist ending and I went, seriously? It left me with more questions than answers and I was left feeling dissatisfied.