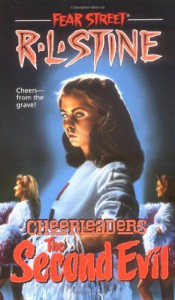 Ahh, I do love returning to Fear Street. A place that I still say is the inspiration for the Hellmouth on Buffy the Vampire Slayer. "The Second Evil" I found to be too short and also it doesn't give you a chance to mourn any characters that we lose. Of course the ending leaves open another book (which I am so reading).

"The Second Evil" follows some months after the events in the first book. Corky is left mourning her sister Bobbi who was murdered. She's left the cheerleading squad and is now dating Chip. Yeah that Chip. Chip who has gone from dating another member of the squad (Kimberly) and then Bobbi and now Corki. I was not a fan of Chip. When Corky starts seeing things and one of the squad keeps intoning the evil has returned, she starts to worry that what they all did a few months ago didn't vanquish the evil for good. And she's right to worry.

Corky is definitely a MC you can root for. I do miss Bobbi, but Corky has more of an investigative spirit I thought. She starts trying to run down leads with Chip and then some of the girls on the squad. I have to say though there's not much development of anyone else really in this one besides us getting more information on Sara Fear. I definitely loved the more information on the Fear family and wanted to know even more about them. When I was a pre-teen and later teen reading these books I would get so freaked out about the whole idea behind Fear Street. A few blocks down from my home was a cemetery that sat besides the railroad tracks. We would go down there during the summer and picnic and play touch football or tag, but we were always taught to be respectful of the graves and people visiting. In the daylight there was never anything that was too scary about the place, but as soon as dusk came around 7, 8, or 9 (depending on the time of year) the place felt lonesome and you felt like someone was out there wanting to touch you. Stine at times makes me recall how I felt the first time as a pre-teen reading this (I was 12 when this book was published) and that alone was enough for me to give this 4 stars.

The writing was solid, but there's not a lot of scares (at least for me) in this one. We do get some gruesome scenes here and there, but Stine quickly moves along as if he is afraid of freaking out his readers. The flow is a bit stop and start in a few places too, but since this is a fairly short book (180 pages) it doesn't hamper things.

The setting of Shadyside and Fear Street still resonate with me and I so wish that Netflix or someone else would consider picking up this series. You can easily update these books and I think would be a fun horror series to sink your teeth into.